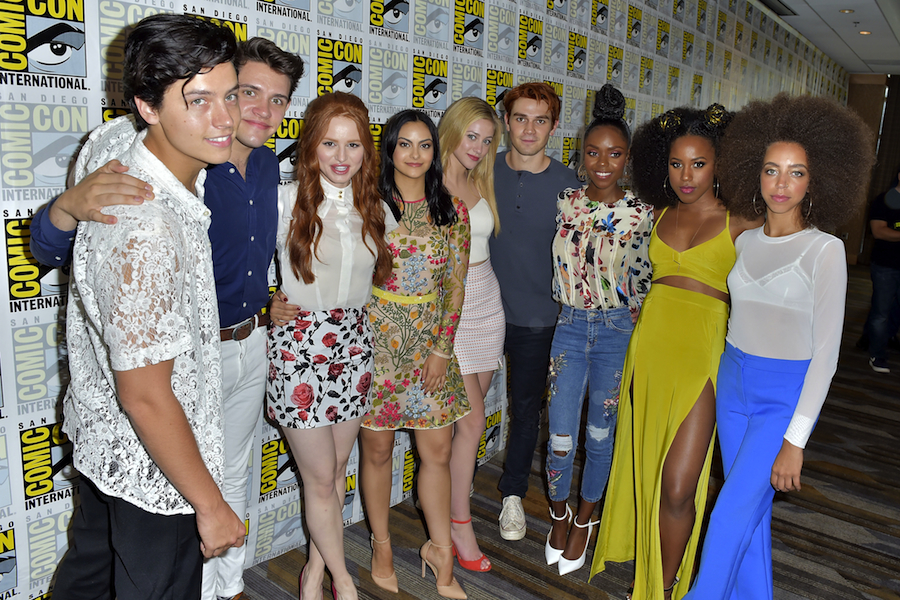 Whew! What a week! While everyone takes to Twitter or other social media to get angry about Wonder Woman getting fewer Oscar nominations than Boss Baby, and how I, Tonya and The Disaster Artist got snubbed in favor of that movie my grandpa fell asleep to called The Post, some other stuff you may like happened! Let’s take a look and get all Taylor Swift on these nominations (meaning, just "shake it off")...

Well, better late than never. I just want to say that Marvel and Disney really dropped the ball not putting this out earlier with the reaction and acclaim Wonder Woman continues to get, despite fans being less excited for the DCEU as a whole. With that said, both companies are worth billions and I sleep in an apartment that, as my girlfriend puts it, “Looks like somebody got murdered in.” Anyway, the Scarlett Johansson-led superhero film now has a set year of release in 2020 but no official date. It’s still early on in the announcement that Black Widow is going forward in a standalone movie, but this is more news than we’ve had before… and rumors of this movie have been around for a long, long time.

Unfortunately we have no other word on anything else going for this film. There are some casting rumors with upcoming Captain Marvelactors Jude Law and Ben Mendelsohn, but even that’s not solid. We do not have word on potential directors, screenwriters, or if a script even exists in any form at this time. What we do know is that ScarJo has signed a $25 million deal for the film, thus pushing her to the top of the highest paid actresses in Hollywood list, and that Disney has as of now three slots for Marvel movie releases in 2020. The release dates, which do not have movies announced for them at this time, are May 1, August 7, and finally November 6. The three rumored films are Black Widow (duh), Guardians of the Galaxy Vol. 3, and Doctor Strange 2.

Ryan Reynolds Gets a Clue

WithDeadpool 2 and Detective Pikachu on the way, it looks like the work is never-ending for Ryan Reynolds, who also just a nabbed the starring role in Fox’s reboot of Clue. The movie, based on the enduring Hasbro murder mystery board game, was made by Paramount in 1985 starring Tim Curry. Fox has ensured, however, that this new Clue will be totally different from the classic flick, with Reynolds playing a different starring role than Curry’s butler character Wadsworth, who served as the audience’s connection to the mystery.

Reynolds’s deal with Clue sees him signing a three-year first look deal with Fox and his company Maximum Effort. That means that Reynolds and Fox will be creating new projects together for at least three more years. Clue has no director attached; however, Deadpool writers Rhett Resse andPaul Wernick are in talks to pen the script. While no release date or other casting news is known for Clue, we do know that Reynolds and Fox are looking to make the film into a franchise vehicle for Reynolds to star in, so if the first one goes well, expect more.

Motley Crüe Biopic Has Been Cast

It was several months ago (getting on close to a year now) that Netflix announced their plans to make a Motley Crüebiopic. The film, called The Dirt, is based on an autobiography of the same name written by all of the band members. Since then, we’ve heard next to nothing, until now… we finally have a cast! Playing the band members are Iwan Rheon(R.I.P. Ramsey Bolton) as guitarist Mick Mars,Daniel Webber as frontman Vince Neil, Douglas Booth asNikki Sixx (the craziest member of the band in my opinion -- look up how he died and came back to life, no joke), and rapper Machine Gun Kelly as infamous home video auteur Tommy Lee. “Jackass” director and co-creator Jeff Tremaine will direct the film because that actually makes a lot of sense given this group’s reputation...

No release date has been announced, but that’s Netflix. I’m still waiting onMute by Moon director Duncan Jones, which, after a lengthy time of announcement and production, just got an official release date last week of February 23 but no trailer.

Disney is pulling at the nostalgia strings once again by developing a series based on the '90s hockey movie franchise TheMighty Ducks. The original film series writer Steven Brill and producer Jordan Kerner are involved in creating a new story surrounding the team. Since this series idea is very fresh out of the oven, it is unclear if any of the alumni like Joshua Jackson, Elden Henson, Kenan Thompson or, of course, coach Gordon Bombay played by Emilio Estevez will be involved in the production.

The franchise spawned the creation by Disney in 1993 of an NHL expansion team in Anaheim called (you guessed it!) The Mighty Ducks. The team had similar jerseys but was eventually sold off in 2005. Three years after the pro team’s birth, Disney created an animated series in 1996 that had a 26-episode run, because people were nuts overThe Mighty Ducks in the '90s. The animated series, also called “The Mighty Ducks”, had next to nothing to do with the film, but hockey is still featured. Just take a look below but be warned, that song might not leave your brain for a week...

We neglected to mention last week that Leonardo DiCaprio will be teaming up with his Django Unchained directorQuentin Tarantino for Tarantino’s upcoming and untitled 1969 movie. As previously reported, the film doesn’t have a title and is vague in plot details. At first, it was reported to be a movie about the infamous Manson murders, but Tarantino said that that part only creates a backdrop for the film, but it is more about the year 1969 than the specific event. DiCaprio is set to play the main character, who’s been described as an aging, former TV star looking to get into the film business. Alongside this as-yet nameless character is his equally nameless stunt double, who is looking to make the transition with him.

Outside of the huge news that DiCaprio has committed to star in the film, rumors still circle around the casting of Tom Cruise, who was said to have expressed interest in playing the lead; however, no one is sure if the specificity of that detail is true, as it seems he may wind up playing a side character, like possibly the stuntman. Brad Pitt’s name has also been thrown in the ring to co-star, and given his similar-enough features to DiCaprio, and his previous work with Tarantino inInglourious Basterds, I’d bet he’d be the stuntman character. The one thespian that has everyone talking is the potential casting of Margot Robbie as the most well-known Manson murder victim, actress Sharon Tate. Tate was around Robbie’s age when she died and the two share the fact they’re very attractive blonde actresses. Outside of that, not much as far as I know (she’s definitely more famous for her work than Tate ever got to be), but Robbie has proven since Wolf of Wall Street (where she co-starred with DiCaprio) and beyond that she has a wide range of characters she can play.

With an estimated $95 million budget and a release date of August 9, 2019, the Sony/Tarantino collaboration has yet to start filming.

The popular hyper high school drama “Riverdale” is making headlines with an episode going into production that will see the cast singing a musical adaptation of the Stephen King novel andBrian De Palma film Carrie. The episode will follow the production of the musical to be shown at the high school, and for anybody who knows the story of Carrie, then this should be pretty ridiculous.

It’s been confirmed that all of the main characters will have roles in the play on stage or behind the scenes as Jughead Jones (played byCole Sprouse) shoots a behind-the-scenes documentary. This musical version ofCarrie has actually existed but didn’t get the reaction its creators Lawrence D. Cohen, Dean Pitchford, and Michael Gore were hoping for in 2012 during its Off-Broadway stint. The episode is scheduled to air on the CW on April 18, so get your buckets of pig blood ready and sharpen up your telekinesis skills!

The breakout star of Girl’s TripTiffany Haddish and her production company She Ready have just signed a two-year first-look deal with HBO. While we don’t know what to expect from this, you should keep in mind that, on top of being a stellar comedic actress, Haddish is a stand-up comic. Things don’t appear to be awkward with this deal despite the fact she did a stand-up special last year for HBO’s premium cable rival Showtime. The deal could result in a new TV show or movie being produced, starring, or, depending on her interests, written and directed by Haddish. There’s no knowing exactly what could happen but I’d wager a guess that we’ll at least see a new stand-up special from her hitting the HBO airwaves.

John Cena Gets The Role He Was Born To Play

It’s hard to find somebody who doesn’t know who John Cena is. The WWE star has been at the top of the Make-A-Wish Foundation's most-requested celebrities list for a long time. Some people may not know who Duke Nukem is, though. So… take a look! (NSFW)

Give Cena blonde hair and a pair of sunglasses to wear indoors andoutside and you got Duke Nukem, which is why Paramount has tapped the wrestler to play the character. This isn’t Cena’s first Paramount film, as he will be starring in the upcomingTransformers spin-off film titled Bumblebee: The Movie alongside Hailee Steinfeld(talk about an odd couple). Cena’s other acting credits include a scene-stealing performance in Trainwreck, Daddy’s Home 1 and 2, and Ferdinand, where he got his first time shot at playing the lead in a major motion picture (although it was voiceover). Other than that, you’ve at least heard of him from his work in the WWE.

For those of you who don’t know exactly who Duke Nukem is, well, I’m sure you guessed from that video he’s a video game character. The muscle-bound action hero specializes in killing alien invaders for the CIA, except he doesn’t seem to have an actual job there. The character actually didn’t get his politically-incorrect mash-up of '70s and '80s action stars personality or voice until the 3rd game,Duke Nukem 3D, which is the one I played growing up.Duke Nukem has no release date but debates online have already begun with most people claiming the movie will either be amazing or awful.

I should warn you it’s more teasers than trailers and sequels as well.

I Kill Giants – “I find giants. I hunt giants. I kill giants.” Based on a graphic novel I never heard of but maybe you have. Also got the producers of the Harry Potter film franchise. Either way this looks effing dope!

Dundee – Danny McBride and Chris Hemsworth... Okay technically this is a Super Bowl ad and not a real movie but CAN YOU IMAGINE??

And a second one:

Pacific Rim 2 – It’s been slow going but finally some more comes out. Also John Boyega gets to be British in this.

Don’t Worry, He Won’t Get Far On Foot – This trailer has people freaking out across the internet because Jonah Hill is unrecognizable with long blonde hair!

Paterno – Lastly, it looks like HBO and Al Pacino are taking the Joe Paterno story down the dark path it deserves: