Hulu's 'Not Okay' Turns to Social Media For the Plot and the Promotion! 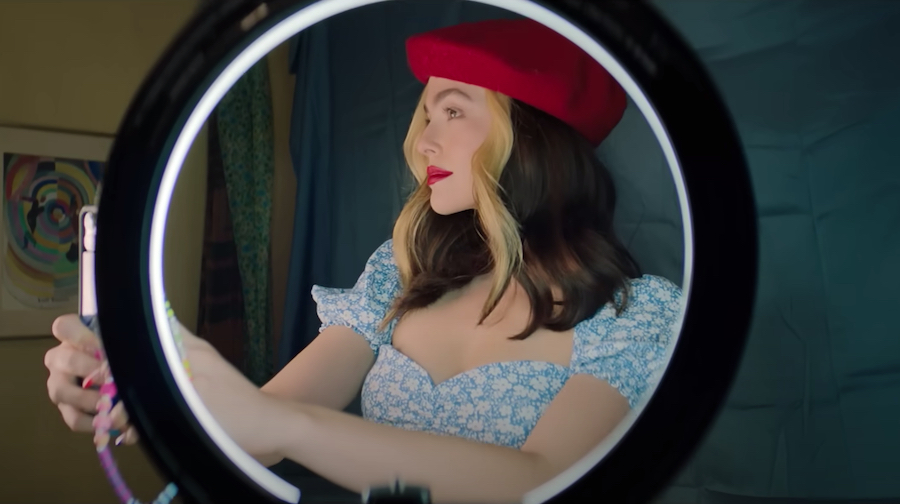 What lengths would you go to in order to achieve your ultimate dream? Quinn Shephard’s new comedy satire film Not Okay, set to release this Friday (July 29) on Hulu, explores this question as a young woman desperate to gain a following and attention on social media goes to extreme measures to do so. Starring Zoey Deutch as Danni Sanders, the teaser trailer opens with a comical warning: “This film contains an unlikeable female protagonist.”

Not Okay follows Danni as she embarks on an absurd mission to achieve social media fame. As the trailer reveals, Danni fakes an entire trip to Paris — uploading pictures and vlogs in front of classic Parisian landscapes such as the Eiffel Tower — all from the comforts of her own home in New York City. After a tragic attack occurs in Paris during her faux vacation, Danni poses as a survivor and gains the fame and following she has been desperately striving for. But, as Danni’s follower count goes up, the truth begins to get revealed, causing her newfound fame to crash around her. As described by Deadline, “it’s only a matter of time before the façade cracks, and she learns the hard way that the Internet loves a takedown.” The film also stars Nadia Alexander as Harper, Mia Isaac as Rowan, and Dylan O’Brien as Colin.

While the newly released teaser trailer certainly has us intrigued to watch, what really hooked our attention was the early promo for the film. Social media obviously plays a huge role in this movie, so it’s only fitting that most of the promo was done through TikTok. The film’s TikTok page features hilarious behind-the-scene looks at the film’s production. Many of the videos feature the main cast of actors with crew members, such as popular TikTok creator Reece (@guywithamoviecamera) participating in viral TikTok trends and audios. Take a look at some of our favorite below:

Reece and His Minions:

@notokaymovie Please take your guesses on who is running the #NotOkay TikTok account ??? #notokaymovie#zoeydeutch#dylanobrien#movies#filmmakersoftiktok#film♬ These are my minions - ???‍♀️• rachel andrew •??

@notokaymovie you better say “bless you” to OUR QUEEN right this freakin’ instant ? #notokay#notokaymovie#zoeydeutch#dylanobrien♬ "Vacation" by Dirty Heads - .

@notokaymovie like does the blonde hair really even look that good?? #notokay#notokaymovie#dylanobrien#zoeydeutch ♬ The Magic Bomb (Questions I Get Asked) [Extended Mix] - Hoàng Read

After scrolling through the film’s TikTok page, we already love the vibe of the whole cast and crew and will definitely be watching. Make sure to check out Quinn Shephard’s satirical take on internet fame and cancel culture when it releases July 29 on Hulu!