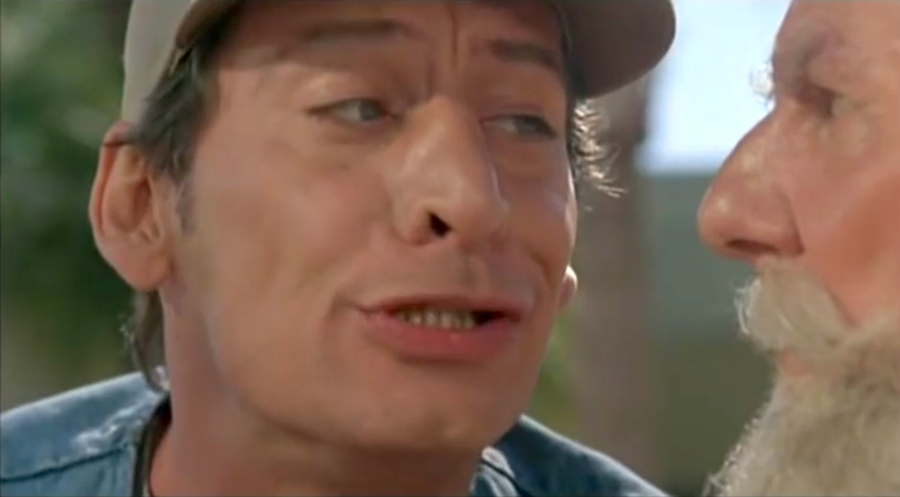 As a child, my sister and I had a deep affinity for the Ernest movies. I mean, who doesn't love Jim Varney? The late actor (R.I.P.) starred as the lovably idiotic Ernest, a grown man-child who always winds up in haphazard situations. Varney did wonders with the role: he somehow made Ernest, who should be the most annoying moron on the planet, likable.

Released in 1988, this installment of the Ernest film franchise (he goes on many other cinematic adventures, including Ernest Goes to Camp and Ernest Goes to Africa) finds Ernest working as a taxi driver in Florida. Prior to seeing Ernest, we are introduced to a surprisingly skinny Santa Claus (Douglas Seale) who appropriately resembles Colonel Sanders, as any Santa worth his salt should. Santa has decided that it’s time for him to retire and find a new Santa. He happily tells this to a businessman from Toronto, who doesn’t appear to listen to a word Santa says and instead takes a nasty dig at Pittsburgh and comments on how much he wants snow for Christmas (I have yet to meet anyone from a cold climate that wants snow for Christmas, so I knew that I would have to increase my suspension of disbelief for this film).

After Ernest accidentally kills one of his passengers (he literally kills one of his passengers and throws him on a conveyor belt, which no one seems to notice), he picks up Santa Claus, who wants to head to the Children’s Museum to meet his possible successor. Santa really proves that he is a saint after Ernest causes a 10-car pile crash after he chases after a Christmas tree. At no point does Santa question why his cab driver darts out of his car to retrieve a Christmas tree and leaves him in the backseat, nor does he run screaming out of the cab when Ernest gleefully returns with the tree. This whole scene really has no point other than to show how goofy Ernest is (I think? or to encourage others to run out of their cars for Christmas trees?) and it’s hilarious:

On the way to the children’s museum, Ernest and Santa pick up a street-wise toughie by the name of Harmony (Noelle Parker). As the film goes on, Harmony and Ernest’s relationship becomes more and more concerning, as Harmony chooses to visit Ernest’s cousin Vern and doesn’t run away when he destroys the house, then spends the night at his house. There is no explanation as to why a teenage girl (even one with family problems) would so joyously spend so much time with a middle-aged hot mess like Ernest, and frankly I found this to be the strangest plot of the film. Why is Harmony hanging out with Ernest? Doesn’t his behavior concern her? Does she not have friends? And why doesn’t Santa find this strange at all? So many unanswered questions!

The questions remain unanswered as Santa goes to speak to his possible successor, Joe Carruthers (Oliver Clark), the king of local children’s programming in Orlando, FL. Santa approves of Joe because he teaches children to say “Please” and “Thank You” (which I get -- manners are important!), but Joe has an agent who wants to make him a “star”... by putting him in a Christmas horror film featuring a monster made out of green tinsel and wrapping paper. I’m sure that the monster is intentionally supposed to look bad, but I really couldn’t stop laughing at this. Is he supposed to look like someone’s living room floor after the unwrapping of the gifts?

Ernest, Santa, and Harmony set off to convince Joe to become the new “Santa” and to abandon his film role. Along the way, Santa ends up getting arrested, in what is my favorite bit of the movie. Santa somehow ends up in a Turkish bathhouse and convinces the other prison thugs to sing Christmas carols with him. I love that Santa is completely fine with all of this.

The film gets even crazier as a group of airline personnel are forced to deal with flying reindeer, and Ernest takes Santa’s sleigh on a joyride around the world. Ernest Saves Christmas is actually fairly sane when compared to the other Ernest films, but that doesn’t make it any less delightful. The film does have a sweet message to it, and reminds us all of the true spirit of Christmas. And there are many scenes of Ernest injuring himself. What more do you want from a Christmas movie?

And just because, here’s a scene of Varney in drag:

You can watch the full movie here!