Hilary Duff's New Single is Sunshine to Our Ears! 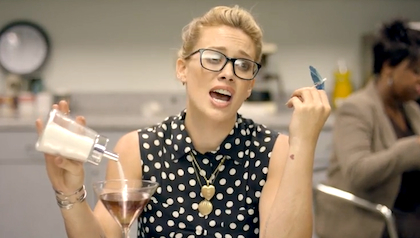 Hey now, hey now -- Hilary Duff released her newest music video yesterday, and it's literally what dreams are made of.

Her video for her latest single "Chasing the Sun" shows Duff stuck in a daydream while at work… and we've all been there (shhh, we won't tell). She sits in her stuffy cubicle, but all she can think about is romping around in the ocean with a tall, dark, and handsome (and shirtless) guy she sees in a magazine. (Same, Hil, same.) Watch it below:

Throughout the video, Hilary tries to liven up her drab 9-to-5 with this mental summer getaway, but keeps confusing her daydream with reality -- landing herself in some awkward situations. My personal favorite is when she thinks she's splashing around with her beach babe but is actually flinging water at her coworkers at the conference table. Whoops.

This song couldn't have come at a better time. Although we are so glad we met a certain someone in the summer to his "heartbeat sound", I think it's safe to say we are in need of a new anthem for the remainder of our favorite season.

"Chasing the Sun" was co-written by Colbie Caillat and we can totally tell. The track has a beachy, bohemian style to it and tells us to not "miss out on the fun" and "keep chasing the sun" -- very Colbie-esque advice.

This is the first song Hilary has released since "Dignity" in 2007, and she explained the long break in a release about her upcoming album and signing with RCA Records:

"I took a break from music for quite a while, but it gave me the power to choose my next steps carefully and I'm really proud of the album I've made."

"Chasing the Sun" is about taking life as it comes, holding the moments in our hands, and enjoying every second of it. Sounds like our new motto.