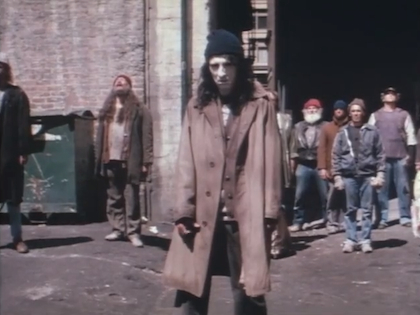 After scouring Netflix for different hidden gems to watch, I decided to take a little break and see what HBO Go has to offer. If you don’t know what HBO Go is, it is a great streaming service whether you have HBO or not. For example, if you have a friend or a family member that has HBO but you don’t, guess what? They can give you their HBO Go account info! You can stream all the movies HBO is currently playing, and almost every series the channel has ever produced. They even let you know what date everything is available until.

This week for Movie Night, I found Prince of Darkness, which is available until August 31 on HBO Go. The director, John Carpenter, is known for horror films like the original Halloween and The Thing. In 1987, Carpenter released this horror masterpiece, Prince of Darkness, but yours truly had no clue it even existed. So when looking through HBO Go, the first thing that drew me towards this film was the thumbnail, which featured a close-up of Alice Cooper staring into the camera. Then I saw it was a John Carpenter film, and I was sold.

Prince of Darkness is a horror movie unlike any other, but at the same time similar to some others. It’s got demonically possessed homicidal homeless people, Evil Dead-type possession of more “sophisticated” people (as the film claims they are), a priest ready to fight evil with God by his side, speculations on who/what Jesus was, scientific facts that I have no idea if they’re true or not, and finally an incredible character named Walter.

Basically the plot of Prince of Darkness has a nameless priest (played by Donald Pleasence, AKA the original Dr. Loomis in the Halloween series) hire a grad school physics professor, his students, and other young scientists to inspect a canister containing some swirling green liquid found in the basement of a Los Angeles church. From the title of the film (and if you read the HBO Go summary), you can tell this green liquid has something to do with Satan. When the team arrives at the church, some creepy things are happening with the homeless people of the neighborhood. First off, there is an abundance of homeless people occupying the allies of the church, even for Los Angeles. Secondly, they all seem to be obsessed with bugs and are clearly under some sort of demonic possession. Most importantly, one of these homeless people is played by Alice Cooper. Watch out, though -- later on in the film, the homeless people prove to be quite dangerous, especially homeless Alice Cooper (AKA Hobo Cooper).

As the film divulges scientific facts revolving around this canister, and the properties of reality in general, you have fun as you feel like you’re learning a lot, but I have no idea if any of it is true or not. In any event, a most likely non-scientific fact is discovered: that this green liquid is found to be the key to freeing Satan but can only be opened from the inside. Donald Pleasence is ready to take Satan down with the might of the Holy Bible, which helps to fuel debate amongst some of the students and scientists. Quite a few of them believe the priest to be a mad man and they should just pack up and leave. I don’t blame them. We don’t even know the priest’s name! The college professor that is leading this team believes that they are all here for a reason and must combat Satan.

On the complete other end of the spectrum, you have one of the students, named Walter. From the moment this opportunity to prove himself as a top-notch physicist was luckily presented to him, he spits on the offer, claiming it would ruin his plans for the current weekend. Although a supporting character, Walter is no doubt the most entertaining in the film. He weaves his way through the mission over-exaggerating everything, telling lame jokes, insulting pretty much every woman on the team, and, of course, constantly complaining about how his weekend is ruined. What are these grand plans he has for the weekend? Although never totally confirmed, when people start disappearing, he claims they’re probably going to Chinese restaurants and getting laid. If these were in fact his “big” plans for the weekend, I’d say it was a case of half wishful thinking and half if he can afford food or not.

That’s just a taste of what you can expect from John Carpenter’s Prince of Darkness. I won’t talk about the Evil Dead-type possessions and the speculations about Jesus, because those are crucial to the plot and I don’t want to ruin anything for you. What I will say is that, as a huge John Carpenter fan, I have no idea how I never heard of Prince of Darkness before, but damn am I glad I found it now. So, do yourself a favor, grab somebody to cuddle with, load up your cousin’s HBO Go account, and pop on this flick tonight!