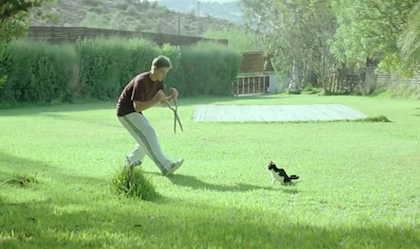 People fencing each other with straws? Real planes falling out of the sky and discovered as the size of a toy model? Sexual favors in exchange for headbands? What is this insanity?! Is America ready for such things?! You can see all this and more in the 2009 Academy Award-nominated foreign language film, Dogtooth, which Netflix members can enjoy again and again instantly. It's a Greek film, but don’t worry -- there are subtitles and even a scene where English is spoken.

Dogtooth takes us on a journey into the household of what seems like a picture-perfect family, consisting of a father, a mother, and their teenage children (a son and two daughters). Much like the Brady Bunch, this family spends an awful lot of time together... probably because the mother and father have raised their children to never leave the property they live on. Luckily for the kids, though, there is a pool and a rather large fenced-in backyard. Most of the movie takes place on the grounds of the house.

Things go awry when the father brings home a young woman named Christina once a week to have sex with his son, to get rid of his "urges". Christina says things and spreads ideas that are completely foreign to the siblings, and even goes as far as exchanging gifts like movies and glow in the dark headbands for sexual favors. She’s exactly like the Mary Poppins for the 21st century. Tensions build and things get especially complicated when one of the siblings questions what else is beyond the fences...

Don’t be discouraged by the thought of the film taking place almost entirely on the same property; it’s an absolutely bonkers thrill ride from start to finish. For starters, the single setting gives the film a dream-like aesthetic, where, despite day and night occurring, it feels like it’s all one long day with no tomorrow in sight. To keep themselves busy from this one long day, the siblings often engage in competitions, like sniffing chloroform to see who will wake up first, fencing with drinking straws, and complex games of Marco Polo. Also, a stray house cat comes into the picture. Believing the cat to be the most dangerous animal, a battle ensues to protect themselves and their parents from certain death. With these constant competitions, Dogtooth weaves its way through hilarious catacombs of slapstick humor and graphic violence. It is an absolute gem waiting to be discovered by anyone with an open mind and an absurd sense of humor!