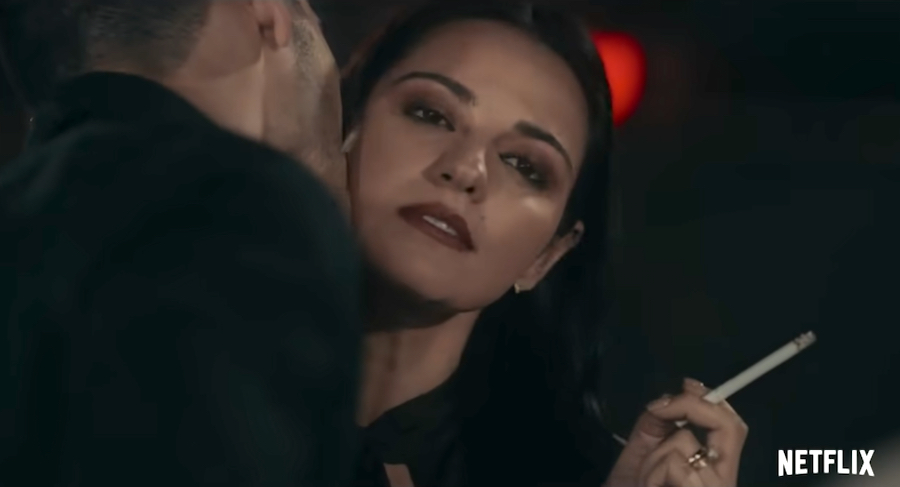 Netflix has proven once again that it is the master of dark, twisted, hard-to-turn-off thriller shows with "Dark Desire/Oscuro Deseo". The Mexican series is perfect for fans of Netflix’s “You” and “Money Heist (La Casa de Papel)” and non-Netflix shows such as “The Sinner” and “How to Get Away With Murder”.

"Dark Desire" came out July 15 and consists of eighteen 30-minute episodes. The show is in Spanish, but English subtitles are available. It also has one of my favorite soundtracks! The show has a content warning that viewers should pay close attention to -- there are many graphic portrayals of violence, suicide, and sex.

The protagonist in "Dark Desire" is Alma Solares (Maite Perroni), a well-respected college professor and mother of Zoe (Regina Pavón). When Alma catches her husband, judge Leonardo Solares (Jorge Poza), on the phone saying he will spend the entire weekend with someone while she is visiting her best friend Brenda Castillo (María Fernanda Yepes), Alma begins to suspect he is cheating on her with his secretary. Taking her best friend’s advice, Alma hooks up with a much younger guy she meets at a club, Darío Guerra (Alejandro Speitzer).

Alma is torn about whether she should tell her husband about her infidelity when her one-night stand shows up to her class as a student. Alma struggles to stay away from Darío even after learning that her husband is not cheating on her with his secretary, risking losing her marriage, her relationship with her daughter, her job, and her societal status.

A few days after Alma and Darío meet, Alma learns that Brenda committed suicide the night she left. Alma, her husband, and her brother-in-law Esteban (Erik Hayser) all independently try to figure out if Brenda really committed suicide or if she was murdered, uncovering the dark past of Darío Guerra.

No but really i just binged watched Dark Desires and I don’t regret it one bit ? the passion the romance the murder mystery it’s literally everything I love rolled into one . My opinion 10/10 recommend watching it in Spanish though if you understand Spanish

This was the most emotional, heart-racing show I have seen to date. It is impossible to pull your eyes away, because you never know what will happen next. A line that stood out to me was: “It’s like when you’re in the middle of a magic trick, and one moment, you’re sure of something, and the next, it’s the opposite,” and this line couldn’t be more perfect to describe this show.

Dark Desires on Netflix is literally the biggest mind fuck.

10 episodes in and I can’t even tell you the plot cause I have 0 idea what’s happening pic.twitter.com/30GKOqigh5

The entire way, you’re certain who the killer is and who the good guys are, but none of it is what you expect it to be. An interesting component of this show was the style. What one does not necessarily realize right away is that the show presents Alma’s paranoia as reality. There are multiple scenes that appear to be the truth, but you soon realize they are just a re-enactment of the thoughts and fears inside of Alma’s head. The viewer truly does not know what is real and what is her imagination until later, ensuring that the viewer has to watch until the end to know the truth.

i just finished watching oscuro deseo (dark desires) on netflix and can i just say this show has so many plot twists. like i really couldn’t really figure out what was going on until the very end. pic.twitter.com/eviyAZd7TU

"Dark Desire" has the perfect ending; however, it still leaves the viewer wanting to know what could possibly happen next. Though the show has yet to be renewed for a second season, I sure hope it is!

Ready for Netflix to announce when season 2 of Dark Desires comes out bc bitch... I need it ASAP ? pic.twitter.com/Rya0zNlVLt