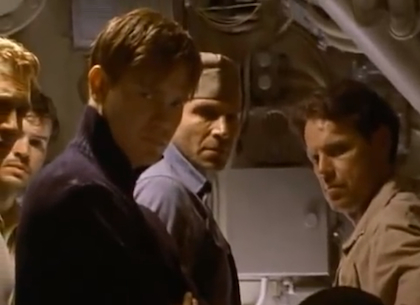 From serious documentaries to cheesy horror movies to films that are just downright bizarre, the popular membership-only movie/TV show streaming web service, Netflix, sure has a plethora of hidden gems that its customers might overlook. Don’t worry, folks, I’m here to guide you on your path towards pure entertainment bliss.

This week, I am here to talk to you about a 2002 World War Two horror film that takes place almost entirely on a submarine called Below. Oscar-nominated director Darren Aronofsky (Requiem for a Dream, Black Swan) not only produced Below but also helped write the film. It also features a fun glimpse of a young Zach Galifianakis tackling a somewhat serious role before he became a comedian.

Below takes place on a submarine called the USS Tiger Shark, which is patrolling the Atlantic Ocean in 1943. The submarine receives an order from a British patrol plane to pick up survivors from a British hospital ship wreck. The commanding officer Lt. Brice, played by Bruce Greenwood (Star Trek Into Darkness, Super 8), agrees to pick up the four remaining survivors. (The trailer says three because one is wounded.) Among the Bristish survivors is a nurse named Claire Paige, played by the delightful Olivia Williams (Rushmore, Hyde Park on the Hudson), who enters the film as the only woman on the submarine. The main thing to remember here, folks, is not that Claire Paige is the only woman trapped on a submarine full of men who haven’t seen a woman in quite some time. What you need to remember is that British people saw other British people floating in the middle of the ocean towards sure death. Rather than using their plane to save their fallen comrades, the Brits ask red-blooded American citizens to save these British survivors from being fish food. You're welcome, “Great” Britain.

After Lt. Brice makes a rash decision (no sense in ruining the fun for you guys), the crew and the new group of British survivors begin to hear voices rattling through the halls of the submarine. The crew is divided on if the submarine is haunted, if their new British friends brought some sort of disease over with them, or if certain members of the crew are finally breaking down. The film also provides a nail-biting encounter with a rival Nazi submarine. What WWII submarine horror film wouldn’t have things like this going on?

At this point, you’re probably thinking, “Why the hell haven’t I heard of this great American film?” Well, in 2002, it was actually a box office failure, despite pretty good critical reviews. According to Rotten Tomatoes, the film holds a fresh score of 64%, which isn’t easy for a horror film to obtain on that site. What was going on with Below in 2002, though? Since I was twelve in the year 2002, I don’t remember if I heard anything about the film or not, mainly because of my sheer devotion to playing non-stop hours of Play Station 2. Way back then, the internet was also not what it is today.

I’ll be honest, the main aspect that drew me towards watching Below was Zach Galifianakis. I originally typed in his name to re-watch the Comedians of Comedy, which I now suspect Netflix sadly took down a while ago. This film Below stood out from all the other titles on his Netflix filmography though. The poster reminded me of “Twin Peaks” and in no way looked like a comedy. In the film, Galifianakis plays the supporting role of Weird Wally. Like Galifianakis, Weird Wally is exactly as his name implies -- weird, but in a fun-for-the-kids-and-parents kind of way. Weird Wally is the USS Tiger Shark’s well-read engineer, who, judging by his room full of voodoo trinkets, may also be something of a witch doctor. The voodoo trinkets aren’t really addressed by anyone, but when we see inside Weird Wally’s room, voodoo dolls and other similar items literally cover the place. Are his voodoo skills on display to combat the ghost or ghosts that may or may not be on the submarine? You’re going to have watch to find out, but I can say that Weird Wally’s engineering skills are put to the test. Overall, Galifianakis gives a believable and well-executed dramatic performance as Weird Wally, but just because it’s Zach Galifianakis, I couldn’t help but laugh whenever he was on screen.

Even without his stellar performance, Below has some solid performances from everyone involved. The production value even looks great by today’s HD standards. Even the computer graphics used in the film look better than some big budget movies from today. But, most importantly, the story is actually entertaining and smart. So, if you’re looking for something to put on in between binging on grilled sausages and cheap great American beer this Summer, what better way to honor America than by watching a nautical-themed horror film about our greatest generation?

Check out the trailer below!