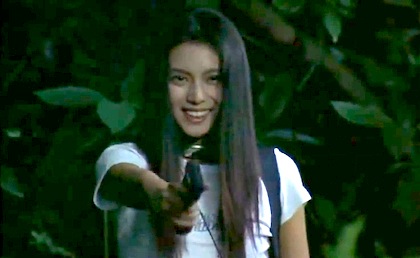 What’s this? A movie about a totalitarian government that uses a special program to pit young adults against each other in a fight to the death, all in an effort to maintain population control and keep the society scared and revoltion-free? That could mean only one thing… The Hunger Games!!!!

Oh, but wait... no, it’s actually a Japanese movie from the year 2000 called Battle Royale that bears an eerie resemblance toThe Hunger Games. Don't believe me? Well, judge for yourself, as it is streaming right now on Netflix and it is freaking awesome! Check out the trailer:

As you may have noticed, it said, “42 Students, 3 Days, 1 Survivor.” That’s basically the rules of “The Program” in Battle Royale. One class is selected, they are brought to an island, they are given weapons (some are better than others), and they all must kill each other until there is a single final student standing. If there are any more than one student survivors by the end of Day 3, then everybody must die. How they do that? I’ll let you see how it unfolds in the movie.

The whole notion of “The Program” plays into the fact that, in the Battle Royale universe the Japanese government is seeking complete and total authority over all aspects of society, including the private lives of its citizens. Because of this, a lot of the kids growing up in the society are starting to rebel, mainly by ditching school. Since this is a movie based on a book of the same name, there’s only so much information they can fill into the movie. It’s subtle, but in some scenes, there are references to some of the kids engaging in drug dealing, prostitution, and somebody’s uncle who appears to be a terrorist, so there are always hints of anarchy going on in the privates lives of a lot these kids.

I warn you right now, this movie is not for the weak of stomach. UnlikeThe Hunger Games, which pulled its punches with on-screen violence, this film is filled with lots of gore. It’s definitely not something that most parents would let their kids watch. Also, if you hate reading subtitles, sorry, but give it a try. (And I don’t mean to keep bringing up The Hunger Games, just they have very similar plotlines, but I actually like both.)

Battle Royale is also funny at times. There are a few scenes with some weird intercut text, and the kids talk exactly how you would expect kids to actually talk in this situation. Despite this movie being from a different country with foreign customs to us and is fifteen years old, this is still the most honest-sounding dialogue that I’ve ever heard in film that young adults would actually say. I don’t want to spoil anything, but there is a death scene that, when you see it, you’ll know what I mean.

Also, you may have noticed that, in the trailer, American directorQuentin Tarantino has given this movie his stamp of approval by calling it his “favorite movie of all time”. So much so, in fact, that QT brought in one of Battle Royale’s stars named Chiaki Kuriyama to co-star in his filmKill Bill: Vol. 1 (NSFW):

(Fun facts: 1. Notice Kuriyama is wearing an oddly similar school uniform as inBattle Royale. 2. Her Battle Royale co-starKou Shibasaki was supposed to appear with Kuriyama and the two would be similar schoolgirl psychopaths. Shibasaki had to turn down the part due to scheduling conflicts but later appeared in the American movie 47 Ronin with Keanu Reeves.)

If you can’t tell by now, I am a huge fan of this movie. I’ve read the book and the mangas for it. I even own an illegal copy of Battle Royale as it was not allowed in the United States until 2011, despite being Japan’s most popular movie of that time. When it was screened here in 2000, the test audiences felt it had too much mindless violence in it to present in a post-Columbine environment. When I discovered this movie about eight years later, I knew I had to have the DVD. So I did some research and found the DVD in the deepest reaches of the Internet. Now, on occasion, I have to change the subtitles from Korean to English when I play it. That’s literally the only drawback to having that copy of the movie.

Contrary to popular belief, though, the school shooting did not ban this movie.Battle Royale was actually never actually banned; just nobody in America wanted to distribute it because the licensing deal was too high and other big companies who could afford it didn’t want their names attached to something so violent back then. Today, Battle Royale still has not gotten a wide release in the USA. Some reports say that, if it were to go in front of the MPAA, they would have to try to cut certain things out to get an R rating, and at that point, there wouldn’t be anything left in the movie. Battle Royale is still banned in Germany to this day, however, for its “glorification of violence”. So please, go on Netflix and watch Battle Royale right now while you still can!