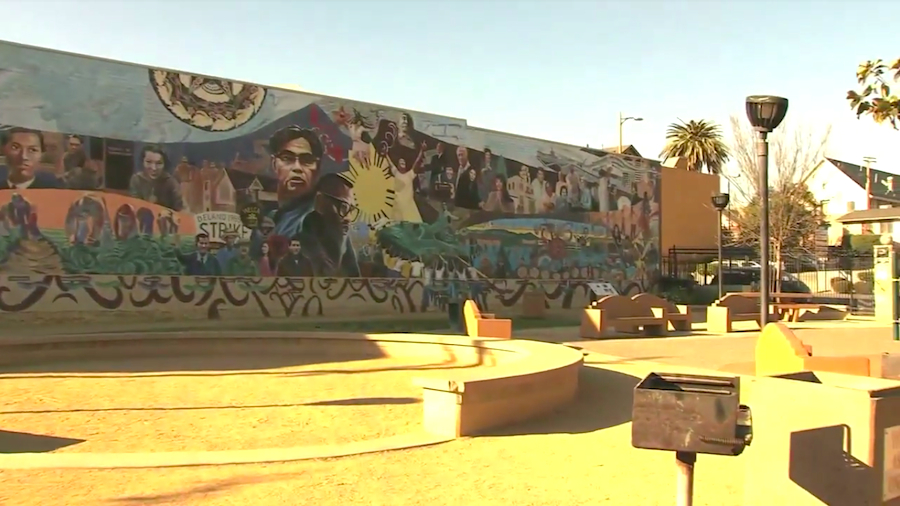 Bordering the eternally traffic-jammed 101 Freeway, the southwest section of Echo Park in Los Angeles is known as Historic Filipinotown. It honors the Southeast Asian country comprised of over 7,600 beautiful islands: the Philippines. The district represents a culture that is prevalent throughout California, as Filipinos make up the largest population of Asian-Americans in the entire state. It is documented that Filipino immigrants settled in America as early as the 16th century, and have flourished since.

The neighborhood is home to many cultural landmarks, such as the country’s largest Filipino American mural, called “Gintong Kasaysayan, Gintong Pamana”, and the nation’s oldest Filipino Catholic Church, St. Columban. There is hidden street art with messages of humanity and peace, some in the form of the Filipino Sun on lamp posts. The eight rays of the sun represent the first eight provinces that rejected Spain’s government. Originally colonized by Spain in the 1500s, the Philippines fought for its independence until a declaration was signed on June 12, 1898, which is now observed as their Independence Day. However, Spain and America both failed to recognize this, and it wasn’t until 1946 that they obtained national sovereignty.

Historic Filipinotown also has a Filipino American WWII Veterans Memorial, a council that aims to preserve the culture, karaoke, and supposed (but elusive) Jeepney tours. Jeepneys are an iconic, well-decorated form of public transportation in the Philippines. Alongside this, another popular method of getting around that America is missing out on is the tricycle. These vehicles are a combination of a motorcycle and covered sidecar that can fit two or three people, with an additional space for a fourth rider on the back of the motorcycle.

Of course, Filipino culture isn’t limited to one area of the city. There are endless food options around the county, ranging from familiar chains such as Jollibee, Red Ribbon, and Chowking, to welcoming restaurants like Nanay Gloria’s, Pinoy Pinay, and Bahay Kubo, and even food trucks like Dollar Hits. (You can never go wrong with lumpia, pancit, and garlic rice.) One intriguing staple in many Filipino desserts is ube, a vibrant purple yam that can be found in many sweets. An example of that is halo-halo, a layered dessert that incorporates ube, shaved ice, coconut, jelly, and more, and the name itself implies that one should mix them all together.

Whether you live in Los Angeles or are planning a visit, it’s worth getting immersed in some Filipino culture, hospitality, and maybe even learning some words in Tagalog. If you are a tourist, these less obvious destinations that promote the rich diversity of the city are necessary for understanding its beauty!