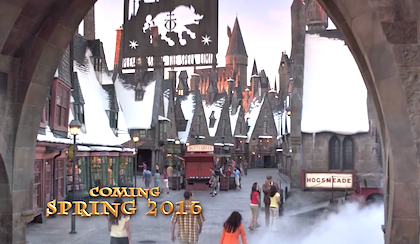 Universal Studios Hollywood has a magical announcement and we are so excited to share the news – Hogwarts is finally coming to Hollywood!

Next spring, Hollywood theme park-goers will get the chance to meet the West Coast’s most anticipated entertainment experience to date, including the land’s signature attraction, “Harry Potter and the Forbidden Journey”, in hyper-realistic 3D-HD.

That’s right, Potter people, the countdown is on for opening day of The Wizarding World of Harry Potter in Hollywood. The attraction will bring guests the same authenticity and storytelling found in both Universal Studios Orlando and Japan, while it’s expected to bring in Hogwarts fanatics from all over the world for generations to come.

This attraction turns fantasy into reality with an immersive themed land that will sweep visitors off their feet and right into a Hogwarts hot-seat, bringing everything about the Harry Potterfictional world into real life.

The Wizarding World of Harry Potter will include pulse-pounding rides and attractions, the one and only Hogwarts castle, and various shops complete with gear that will satisfy all of your magical needs. Even more, the land will be stocked with places serving nothing but authentic food and drinks that come right from the Harry Potter stories. Hello, Butterbeer!!!

Universal Studios Hollywood isn’t the only business with Potter-packed news for 2016. Warner Bros. just made the announcement that Oscar-winning actor Eddie Redmayne will be taking on the leade role of Newt Scamander in Fantastic Beasts and Where to Find Them, a trilogy based on an in-Potterverse textbook central to all Hogwarts students' education.

The script will be written by J.K. Rowling herself, plus long time Potter director David Yates plans to make a come back for the film.

The trilogy’s first chapter is scheduled to release in theaters November 18, 2016, just months after The Wizarding World of Harry Potter attraction opens at Universal Studios Hollywood. We're so excited to have Harry Potter back in our lives!

Check out the official annoucement below. For more details on The Wizarding World of Harry Potter, visit the Official Website.