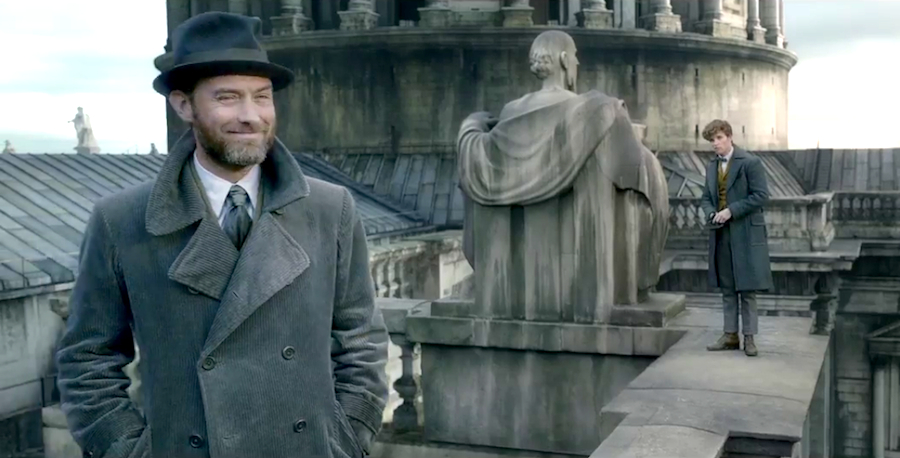 Wands at the ready, Potterheads, your first look at Part 2 of the 5-chapter Fantastic Beasts saga is here!

Eight months ahead of its November 16 release, we finally get to peer into the world of Fantastic Beasts: The Crimes of Grindelwald, the follow-up to 2016’s Fantastic Beasts and Where To Find Them. While the first film, obviously, focused heavily on the actual beasts, it seems this next movie will be more heavily involved in the chase after the dark wizard Gellert Grindelwald (Johnny Depp), who wants to bring the wizarding world out of hiding and rule over the world (and the Muggles).

It also seems this film will feature more locations around the world, as opposed to the first film, which took place exclusively in New York City. We’ll be going back to the Big Apple too, no doubt, since characters Jacob, Tina, and her sister Queenie will be involved again, but we’ll also be making important stops in Paris and also get a peek at 1920s-era Hogwarts, where Professor Dumbledore was still a teacher and not yet headmaster. (And for those wondering, no, we won’t be seeing a young Tom Riddle amongst these Hogwarts students, as he was only a baby at the time and didn’t enter Hogwarts until the late-‘30s.)

The trailer shows us this young(er), strapping Dumbledore (Jude Law) as he is called upon to aid in the capture of his old buddy Grindelwald. I admit, I had pictured him to look a bit more… flamboyant, as Dumbledore was always described as being rather eccentric, but hey, J.K. Rowling herself is directly involved with the production as the writer and a producer, so who am I to question?!

It’s also implied in the trailer that Newt Scamander (Eddie Redmayne) is the key to defeating Grindelwald… which anyone who has read the books will know is not true as (spoiler alert??) it is Dumbledore himself who ultimately defeats Grindelwald in a legendary duel in 1945 which resulted in Grindelwald’s imprisonment and Dumbledore becoming the shiny new owner of the Elder Wand. But apparently the history books left out the part where Newt Scamander played a key role in this, so I guess we’ll have to wait and see how it plays out!

For now, check out the trailer below, and be sure to hitch a ride on the nearest broomstick when the film hits theatres in November!