Film/TV Reboots With the Original Stars' Kids We Want to See! 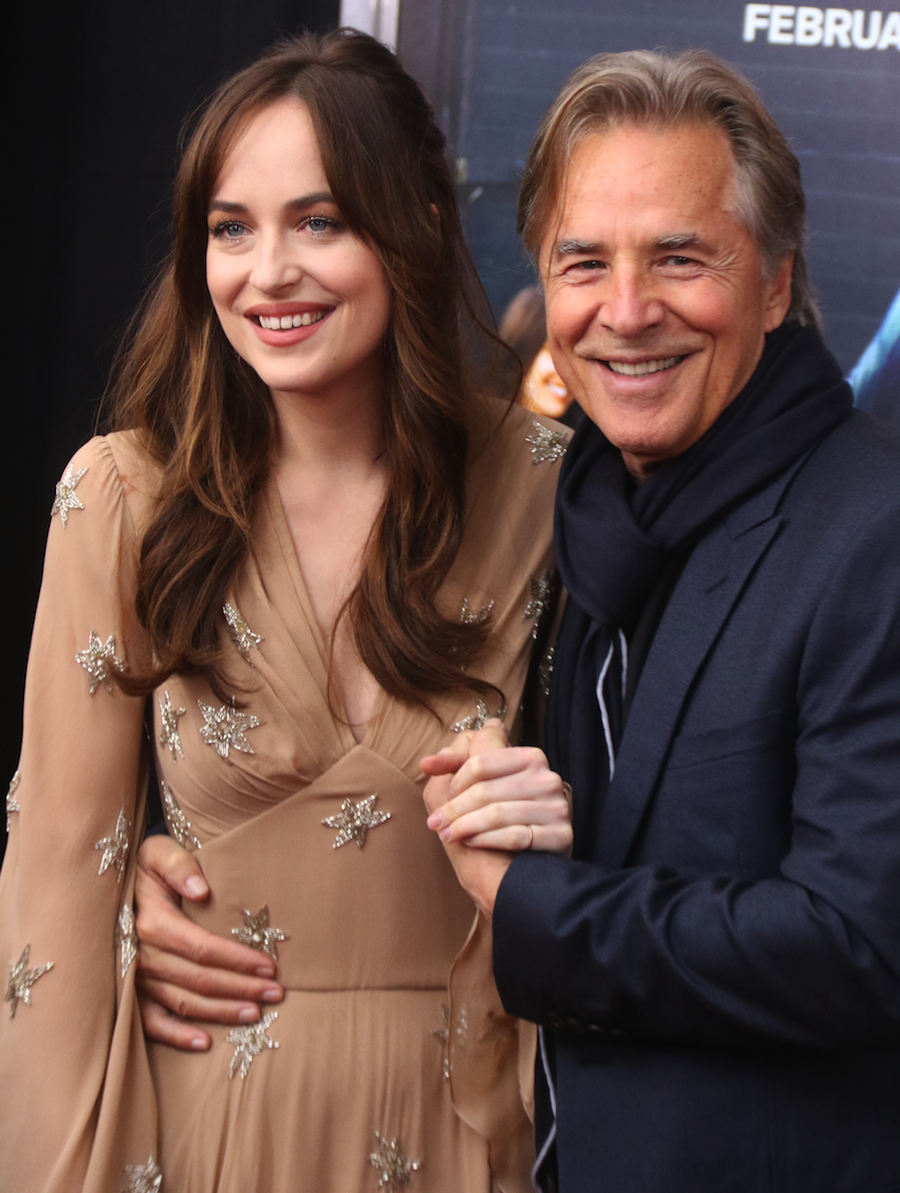 Recently, much to our collective disappointment, Will Smith not only squashed demands for a “Fresh Prince of Bel Air” revival/reboot/reunion (the REAL 3 Rs), he also murdered the prospects in colder blood than his most recent role as assassin Deadshot. Lots of people we’re hoping that, in any of these once-possible reincarnations of “Fresh Prince of Bel Air”, Smith’s own real-life son Jaden Smith would play his fictional son. There was even talk of just remaking the show for a more modern vibe with Jaden taking on the same role as his dad, but Will said no to that as well. With all this talk of Jaden taking up the delinquent mantel of his father’s old roles, it has me wondering -- what possibilities of celeb kids collaborating with their parents or just taking over their old roles could there be? Let’s take a look at a few I'd like to see:

We all know it and it’s been joked about tirelessly, but Hollywood is all about making remakes and gender-swapping everything. In this scenario, you get a three-for. In this situation, I would call for a remake of the original Die Hard and mashing it up with a remake of Demi Moore’s 1996 movie Striptease, in which Rumer Willis plays the female version of her father Bruce Willis's character of John McClane, who, in this world, is a woman working as an undercover cop pretending to be a stripper to take down political corruption (or something), as well as to use the tips she makes to help pay her legal fees while being in a custody battle for her children. Instead of a gigantic office building full of terrorists on Christmas, this will take place in a gigantic strip club full of terrorists on Thanksgiving (quite possibly the most depressing night at a strip club). It’s now up to Rumer Willis as Joan McClane to take out the terrorists while Leslie Jones plays her dispatch officer that is McClane’s eyes and ears on the outside world, as well as being there for emotional support.

Don Johnson may be known to many these days as Dakota Johnson’s dad, but before that, he was all the rage in '80s TV for playing the role of Detective James “Sonny” Crockett in "Miami Vice". This would be a movie continuation or reboot where Crockett is brought back into the seedy underbelly of Miami to help teach his daughter, Justice “Sammy” Crockett, how to be a cop in Miami. These tasks include busting up coke deals while doing said coke, high-speed boat chases that put everybody around them in danger (while doing coke), traveling to Cuba illegally for the hell of it (on coke), never being tied down to one sexual partner at a time (Sonny has no idea who Sammy’s mother is) while doing coke, and overall how to balance life as cop who enforces the law by not letting the law get in the way of your hedonistic lifestyle, which is mostly made up of doing coke. Too bad that the '80s were a different time and Sammy is a very by-the-book cop (millennials… amirite?), thus creating tension between the pair as the movie becomes a weird buddy cop comedy where at the heart of the story is really just a father who has trouble letting his daughter become an adult and her own woman.

Growing up, a comedy that really tickled me silly was the 1995 classic Friday, written by and starring gangster rapper-gone-dramatic-actor-to-comedic actor Ice Cube. Cube, AKA O’Shea Jackson Sr., is a cooler than a freezer kind of man and I’m sure you know he’s also got a cool son named O’Shea Jackson Jr. I can guess you know of Jr. since he played the role of his father in last year’s N.W.A. biopic Straight Outta Compton. Long have fans awaited for the final and fourth installment of the Friday saga after rumors swirled. Notably absent from the sequels Next Friday and the Christmas entry Friday After Next is Chris Tucker’s character Smokey, who fans are hoping would appear in this possible fourth film. Smokey or not, I can tell you that it would be cool to have Cube Jr. show up as the son that Papa Cube’s character Craig never knew he had. Part of the Friday series is that Craig is a deadbeat pothead with potential to do better living in the 'hood trying to make due with whatever low-level position he has in life that gets him somewhat paid. The whole point of the movies, however, is that living in the 'hood isn’t always terrible, and there are days like these three whacky Fridays that attest to that. In this scenario, Craig meets his lost son he had with an ex-girlfriend who knew Craig’s broke behind was never going to amount to anything, so she took their son out of the 'hood to give him more. Now Craig’s son has come out to see Craig and he shows his son his day-to-day life on a Friday where crazy stuff happens as it only appears to on Fridays. Craig also ruins his straight-laced son’s life by introducing him to pot-smoking.

Why is that the title? I don’t know! (I really do… stay tuned.) Isn’t there a Baywatch movie starring The Rock coming out? You bet! Do I care? Heck no! He may not be her biological father, but Jason Momoa is Zoe Kravitz’s step-dad, and since her mother Lisa Bonet's main fame came from starring in a sitcom that we must not utter its name, hanging out with her step-dad should be much better. Gives the two some much-needed bonding time. The story I propose to you, however, is that it starts out with Momoa playing Khal Drogo from “Game of Thrones”. We see him take his final breaths as his wife Daenerys Targaryen snuffs him out. From there, Khal Drogo slips into darkness until screaming and sunlight awake him. He sees somebody drowning in the water and looks around at everybody looking at him. He holds a red plastic thing with rope in his hands. He has no idea what’s going on until somebody shouts at him to “save her!” Drogo sprints into action and goes into full-on slow-motion as we see his tattoos are gone and his hair is in a different style. Suddenly the pieces all fit together and Khal Drogo is really Jason Ioane… Jason Momoa’s first role in the late-'90s/early-2000s on “Baywatch”. He saves the girl who ends up being Zoe Kravitz herself and he somehow speaks English. None of it makes sense until Ioane gets to the bottom of it and finds out he’s actually a character in a TV show played by actor Jason Momoa. Ioane’s and Drogo’s lives are a lie. Together with Zoe Kravitz, he plots to kill Momoa and take Lisa Bonet for his wife. Kravitz is on board because she “hates her step-dad but likes the way he looks.”

It’s crazy to think that Reese Witherspoon has a child that’s getting ready for college soon, but what’s even crazier is that her daughter Ava Elizabeth Phillippe looks exactly like her. Sure, all kids look like their parents, but not many are total doppelgangers! At some point in every movie franchise, the characters go to space (Fast and Furious: Rocket Fuel, anybody?), some literally and sometimes things just get plain weird. The Legally Blonde series has always been over-the-top, but what if they sci-fi the whole thing and have Witherspoon’s character Elle Woods continue her political career so much that she actually has access to all the weird government programs, like cloning? Of course, being still a ditz even though she lawyers the sh!t out of everybody, she would somehow get trapped in a machine that clones her and the clone's aging process goes from baby to sorority girl quicker than a freshman trying to do a keg stand. This is where Ava, who, as far as IMDb and I can tell has no acting experience, steps in and shows the world she can or can’t act. Either way, Hollywood better make this one.

"Fresh Prince of Bel Air" – Just do it, Will. I don’t care. Willow Smith can come on and whip her hair in any direction she likes… just do it!