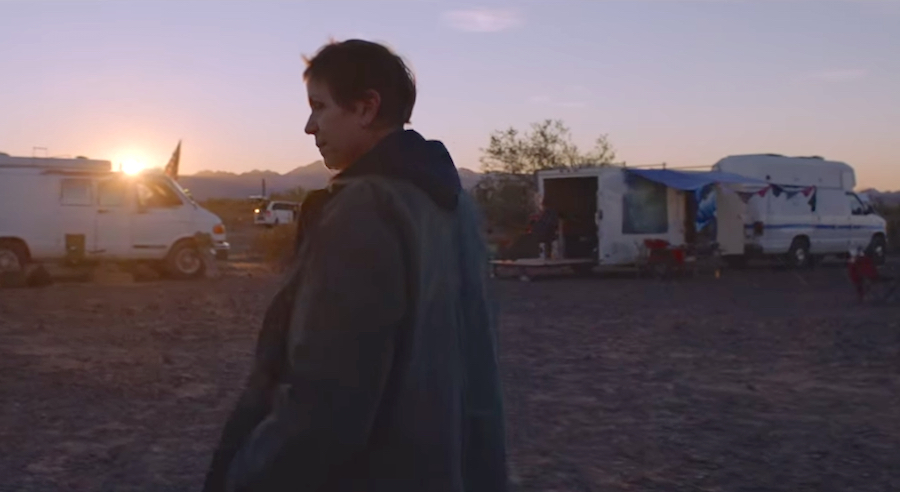 Fern’s husband is dead and her zip code has been eliminated. The recession has stripped her life down to its most singular, essential part: herself. Newly unmoored by traditional obligations, she wanders through America in her transition into nomadic life.

Nomadland is the third feature film by directorChloé Zhao (following The Riderand Songs My Brothers Taught Me) and the most recent recipient of the Venice Film Festival’s Golden Lion Award. Watching the trailer, it’s easy to see why it won: simple yet powerful in its execution, the clip shows Fern (Frances McDormand) as she walks through a desolate camp of fellow migrants. The sunset is beautiful but the reality is bleak, and the pain in Fern’s voice as she tells her friends she’ll “be back soon” from her walk is palpable. In just under a minute, the trailer paints a haunting picture of modern American destitution.

One of the most interesting aspects of the film is its lack of professional actors. It utilizes real nomadic travelers as the cast of Fern’s new world; McDormand is the only working actor on the cast list. This choice adds an extra layer of immersion for the viewer. Besides that, these people serve as reminders that stories like Fern’s are not unique and they are not all fictional. The American Dream has been dead for a while, and thousands of people are suffering because of our resolution to hold onto the mirage.