'Doughboys': The Best Podcast You Aren’t Listening To 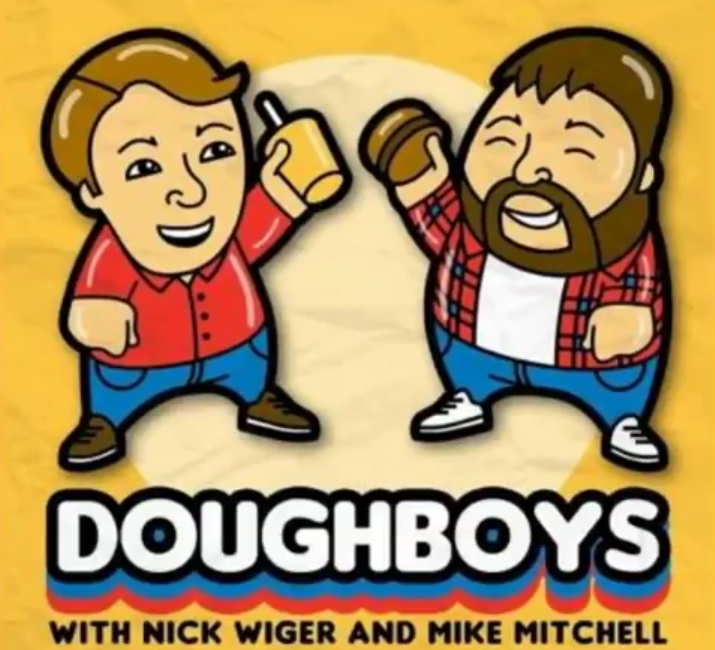 Before moving to Los Angeles, I wasn’t a big podcast listener, but I did listen to many select episodes of Comedy Bang! Bang! and the entire Analyze Phish series. I also didn’t own a smart phone, but once I sat through the crazy throngs of traffic and flipped off my flip phone for good, I knew listening to Phish, Tyler, The Creator and everything in between wouldn’t cut it anymore. A change was needed.

It took some time, but I knew I needed to hear people talk, darn it! It gets lonely on these overcrowded highways where everyone is equally in this fight to a destination with you as much as they’re your enemy preventing you from getting to meet your friend Carrie for tacos at Homestate. So I tuned my ears to podcasts.

In the past year, one of the most perfect podcasts came out, and I doubt you’re listening to it. It follows the journey of two comedy friends who met at the now-historic Upright Citizens Brigade theater. In one corner, from Long Beach, CA, you have writer/former video game designer Nick “The Burger Boy”Wiger (pronounced like "tige"r), and the other corner, coming to Los Angeles from Quincy, MA, is actor/writer/ former “The Simpsons” PA Mike “The Spoon Man” Mitchell (goes by Mitch, assuming because there’s a lot of Mikes out here).

The two converged together as friends in a journey to review fast food and chain restaurants with a special guest each week joining them, and choosing what eatery they will review as a group. The twosome have been doing this podcast for a year now, and in recordings it sounds almost like their friendship, much like their current waist bans, has been wore thin due to their constant bickering and need to roast each other, but it’s all part of the fun… or is it? Today in Young Hollywood: Doughboys.

I will say that this is some of the most fun you will have listening to a podcast, and I have laughed out loud while driving at some point on every episode. There have even been multiple episodes where I have had to pull over to laugh. Much of it has to do with the contemptuously tumultuous relationship between our two hosts, but other parts have to do with the fact they bring on the best people to interview. They often find the most obscure talent lurking in Hollywood to interview, but also some names you’ll recognize.

These hilariously talented people you’ll hear as guests, most likely for the first time in your life, will have you rolling in laughter as you fall in love. So far, they have had many comedians from the UCB community who can be seen in smaller roles on TV shows, including one whom I strongly believe to be the funniest woman in Hollywood and really just needs her break, Betsy Sodaro. Then you have some more above-the-line people like Paul Scheer and Lauren Lapkis. And then, of course, the writers whose faces you don’t see often, like “Master of None” co-creator and former “Parks and Rec” writer Alan Yang.

But at the heart of this podcast lies the bullying nature Mitch has over Nick. Like most classic comedy duos this show comprises of a "straight man" and the "whacky weird one". What sets this apart from many other comedy duos is the fact that both switch seamlessly at the drop of a Dunkin Donut in so much coffee between these roles. As stated before, Mitch has a bullying hold over Wiger, who he constantly says is a robot and a cuckold whose wife, the “lovely” Natalie, he will steal from the former Math Major, Wiger. I put in Wiger’s old major because his economical breakdowns of the food prices vs. quality are a big part of the show, as is his anti-social, robotic character.

But Wiger gets his digs into Mitch as well. Mitch isn’t the fittest man in the world. In fact, he’s gone off and on at least two diets since the show has began. In his former sketch comedy show, “The Birthday Boys”, which aired on IFC for two seasons, him being the fat guy was referenced quite a bit, so Mitch’s weight is a constant gag throughout the show. Wiger’s making fun of Mitch has even sparked his idea to let the fans come in and send messages to “roast Spoon Man” on a weekly basis for Mitch’s introduction.

This kind of fan inclusion is not unheard of in the podcast world, but from Mitch’s infamous sound drops he allows fans to make for him, putting out multiple hashtags a week for fans to write to, and fielding questions, comments, and grievances, at the end of each episode shows that these two (well, maybe just Wiger) really care about what the fans have to say. It’s a breath of fresh air and shows that fans may just be as talented as the celebrity they love.

Before wrapping this up, I have to say that yours truly asked the second question in a recent episode (three questions were asked so I doubt they will edit any of them out) and I was very happy with the answer and reaction from fans and the hosts. What I found really awesome, however, was the fact that, despite the constant barrage of insults they fired at each other, and received from their special guest, the plutonic love these two share for each other was evident, especially at the end when a tribute of sorts is played (no more details on what the tribute is or what it’s for).

So, whether you’re a fan already or haven’t heard it yet, I highly recommend you listen to Doughboys on your next drive. It’s a bit long of a podcast each episode, but perfect for road tripping alone/just trying to drive ten miles in Los Angeles. If you’re hesitant because you’re worried about laughing so hard you might swerve into another lane (a totally reasonable fear), then just remember, at least you didn’t die trying to catch your 42nd Pidgey on Pokémon Go.