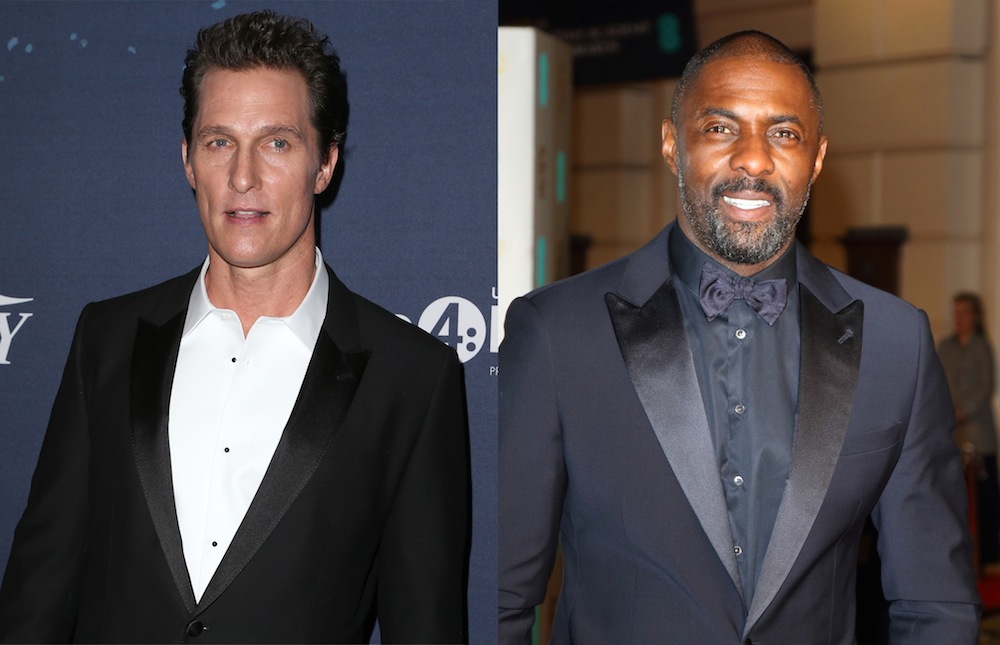 The man in black fled across the desert and the gunslinger followed. No, this is not some type of Johnny Cash fanfiction for you to shrink back in fear from but in fact the first of many, many sentences in Stephen King's beloved book series, The Dark Tower. I've written here before about the burgeoning Dark Tower adaptations in a time long forgotten when ideas about a companion television series were being bandied about and the talents of one Javier Bardem had been secured. Sadly, though, lengthy pre-production delays have more than once stalled this highly-anticipated project, and, as a result, Mr. Bardem has moved on to other more gunslinger-less projects. But the rose still sings to us and all hope is not lost as entry to The Tower may be ours after all.

This week, Stephen King took to Twitter to confirm that Idris Elba and Matthew McConaughey have both signed on to play the leads in the first film of the series. Elba will play Roland Deschain, the withered gunslinger who journeys across the wastelands of In-World in an attempt to catch an evil wizard (the man in black) who threatens to destroy The Dark Tower. The evil wizard in question goes by many names, but most often he is referred to as either Walter O'Dim or Randall Flagg. He is a villain that pops up in many Stephen King stories, including Eyes of the Dragon and, most notably, The Stand. McConaughey, who was being courted for the same character in the recently pushed-back adaptation of The Stand, will take up the mantle of Roland's smiling nemesis. For my money, this is grand casting all around, and I'm anxious to see what these talented folks bring to the roles. A recent exchange between the two actors on Twitter gives the impression that they themselves are looking forward to diving into this adventure/fantasy series, and as a fan of these books, I can't help but find this enthusiasm somewhat encouraging.

Not much else is known about the project other than Nikolaj Arcel (director of the Academy Award-nominated film The Royal Affair) will still be directing and that Abbey Lee (The Dag in Mad Max: Fury Road) will be playing the female lead, Tirana. The character of Tirana is a member of The Can-toi, a race of humanoid beings that hide their true animalistic selves underneath a disguise of human skin. Tirana does not show up until Book 7, but since King has stated that the movie will begin "in the middle" of the series, it'll be... interesting to see what sort of juggling and shuffling has been done story-wise. Surely folks like Odetta Holmes, Jake Chambers and Eddie Dean will be making appearances along the way, as they ultimately form and complete Roland’s ka-tet (a group bound together by a shared destiny. And while I know casting on the nose might be a bit out of style these days, I would like to point out the obvious choice of Aaron Paul for Eddie Dean. The last thing I want in this world is to box Mr. Paul in with just one kind of role, but... come on! Eddie Dean was Jesse Pinkman before that character was a gleam in Vince Gilligan’s eye. It’s the most obvious piece of casting since the first X-Men fan crawled out of the primordial ooze and switched on Star Trek: The Next Generation for the first time.