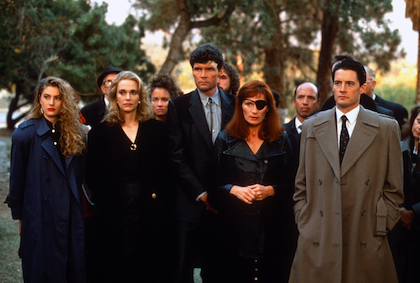 Grab the black as midnight coffee and a slice of cherry pie! David Lynch and Mark Frost’s early-'90s cult TV show “Twin Peaks” is returning after being canceled more than 20 years ago! The show will be brought back under the supervision of its creators for a limited engagement on Showtime in 2016, and Lynch is set to direct all nine episodes. Yet this isn’t the first return of “Twin Peaks” since it’s cancelation. In 1992, Lynch did what he does best and directed a movie that preludes the events of “Twin Peaks” called Twin Peaks: Fire Walk with Me.

Since the soap opera/supernatural thriller/mystery/just plain weird show left the air, fans have been begging for it to be picked up by another network, or to see some sort of a continuation as opposed to a prequel. For years, Lynch denied any plans to continue “Twin Peaks”. Even during this summer, rumors persisted that the show was coming back (as rumors of its return persisted every now and then for years), and Lynch still denied it. Maybe it wasn’t in talks back then, nobody knows, but rest easy, fans… it’s officially back! Showtime has acquired the rights from CBS and will start airing re-runs of the show when they feel the time is right.

Details on the show’s return are hazy at best, but we do know that the show will pick up 20 years after the events of its forced series finale. As of now, we’re not even sure which actors are returning, but it does appear that “Twin Peaks” main character, FBI Agent Dale Cooper (layed by Lynch favorite Kyle MacLachlan), will most likely be returning. He took to Twitter to say, “Better fire up that percolator and find my black suit :-)”. So it’s safe to say he will be back.

Now, before you read this next part… SPOILER ALERT!!!!!!! As all “Twin Peaks” fans know, Cooper was most definitely possessed by the show’s demonic presence, known simply as Bob. In a storyline meant for television, but later visited in Fire Walk with Me (because the show was canceled), being a demon/spirit in “Twin Peaks” means that you must inhabit a human host while on Earth, because you are from a planet made entirely of creamed corn or Garmonbozia, which is basically pain and sorrow that Bob and other spirits use to manipulate people as well as to feed on. Apparently, Lynch and Frost had something against creamed corn and subtly referenced it in the show as being something horrid. Because of all this stuff with Bob, questions are swirling around in my head. Will we see the creamed corn planet? Is Cooper still possessed? If he isn’t, then how did he shake it? And what’s with that lady and that log she’s always talking to? All these questions and more have come up even before the show was coming back. I’ve even gone to Bob’s Big Boy in Burbank where David Lynch ate lunch everyday for seven years at 2:30 to beat the rush. Part of his lunchtime obsession was during “Twin Peaks”. I ordered his special energy boost of a chocolate shake and coffee that he got everyday. I got no answers, though, just more questions and erratic illegible handwriting from high amounts of caffeine, which lead to even more questions… and for what? See?! Another question!

Anyway, if you haven’t watched the show yet (I hope the spoiler alert brought you here), check it out on Netflix. That’s how I found it a couple years ago. I can attest that the show is great. What drove fans away was when the ABC network begged Lynch to solve the murder mystery of Laura Palmer way before Lynch wanted to. (He actually never wanted to solve it.) Lynch abided by the network’s request to solve the murder, which lead to fans moving on because, for a little while, the show lost some steam for a few episodes. If you hit this point and feel the same way… get through it. The end is well worth it, especially since the show is coming back.

This is such great news, people! I can hardly contain myself right now! Before I go off on more rants of black coffee, creamed corn, talking logs, and things that are just plain bonkers, I will leave you with one of my favorite moments from “Twin Peaks”. Enjoy!