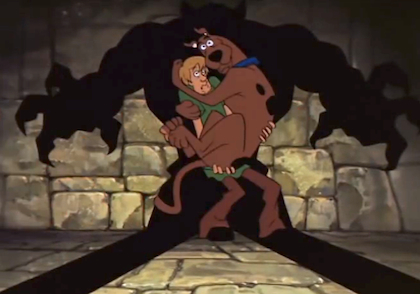 Scooby-Doo fighting Zombies on an island with no way to escape? Zoinks!

It’s shocking to think that, with the zombie craze of the past few years, this was made back in 1998. Scooby-Doo on Zombie Island is truly a masterpiece of cinema that was a head of it’s time.

The animated film follows the gang reuniting again after many years apart. At this point, Fred produces and films Daphne’s own news show “Coast to Coast with Daphne Blake”, Velma owns a mystery/occult book store, and Scooby and Shaggy work as airport security where they eat confiscated food. Fred loads up the Mystery Machine and reunites the gang as a surprise for Daphne for her haunted tour around the country. After solving cases and finding it’s always just some crook in a suit, they make their way to Moonscar Island (Zombie Island) where this time ish gets real. Take a look:

What’s interesting about this film is what’s going on between the lines. There are things in here that kids wouldn’t pick up on. Growing up with my cousin, Scooby-Doo on Zombie Island was a staple of viewing during our childhood. As we got older, we started to notice what was really going on in this film...

For starters, as kids it’s obvious that Fred and Daphne are dating, but what we didn’t notice was that Daphne is constantly embarrassed by Fred to the point of her just being a complete... not very nice woman. Part of this embarrassment may come from the fact that she employs him herself. Also, his jokes are lame, but in the way that people usually find charming and fun (unless you’re Daphne Blake). From things hinted at in the film, it is obvious that Scooby, Shaggy, and Velma are Fred’s friends. Daphne was brought along after Fred began dating her. (We’ve all had that happen in high school.) At one point, Fred comments on some biscuits having great texture and all the food is delicious. Daphne glares at him as if to say, “How dare he!” No attention is drawn to it, but in the background, Daphne clearly glares at Fred for saying this. Fred and Daphne are also shown to be extremely jealous when one of them comments on how a member of the opposite sex is “cute.”

Like with the actual show, Scooby and Shaggy are never seen smoking weed on screen. Whether Hanna-Barbera intended for the characters to be perceived as stoners is something we’ll never know, but culturally, it is widely accepted. What I can tell you is that there are a few scenes before the zombie hoard come out, showing Scooby and Shaggy coughing quite a bit and then complaining about being hungry. At one point, they roll out of bushes, can’t say a word, and smoke bellows behind them... but no mention of fire ever comes up. This is right before everyone sees a zombie for the first time. There is no reason for Scooby and Shaggy to be scared into silence. Shaggy also doesn’t seem to care that his life is going nowhere while all of his friends are successful. He’s quite content just chilling with his dog 24/7.

The only character that we haven’t found anything hidden going on with is Velma. There is the fact that she owns a mystery bookstore with some occult books in them, but mainly she’s just a curious cat who loves mysteries. The whole occult thing is easily missed and may just add in her love for the paranormal. If this were a “Walking Dead”-style zombie excursion, though, I’d put my money on her being the sole survivor. She’s clearly the final girl of the Scooby gang, which brings me to my final point on why you should watch this movie again.

The writer Glenn Leopold (look him up, he’s a Hanna-Barbera vet) crafted something that has a lot of subtext in it. Through his work, my cousin and I have always come up with origin stories of our own, using the rules we learned about from Fred and Daphne’s relationship. For example, we think there’s a good chance that whole reason Scooby and Shaggy always went on these horrifying adventures was because, in high school, they lived in Fred’s van (The Mystery Machine). At some point in time, possibly due to excessive drug use, Shaggy was kicked out of his own home. Being a bad influence on friends, either his parents or (funny enough) Daphne refused to allow Shaggy and Scooby live in the house. To the van Shaggy and Scooby went. Just a thought. Check out this flick and you can make up your own origin stories.

To top Scooby Doo on Zombie Island off, this could be the most frightening zombie film of all time. Take a look:

For a kids movie, those are certainly some gruesome zombies, and back in the '90s, studios assumed kids could handle some heavy rock tunes instead of computer characters rapping along with Miley Cyrus. This featured song, entitled “Terror Time”, was made by a band named Skycycle, who's had an illustrious career of calling it quits about two years after this film. Their spirit lives on, however, in another song from this film. Enjoy:

Keep in mind, you don’t have to listen to anything my cousin and I picked up on. You can just enjoy the film for what it is, which, simply put, is Scooby-Doo done right. It’s got a cheesey and hilariously perfect soundtrack, a real mystery that isn’t so obvious (I won’t spoil it), real monsters, and, of course, Scooby and the gang in full mystery solving mode… so long as they have enough Scooby snacks.

- Daphne Blake is voiced by Mary Kay Bergman, who was primarily known for her work on “South Park” before her suicide.

- Mark Hamill (Luke Skywalker!) plays the elusive and crazy-eyed Southern fisherman named Snakebite Scruggs, which is also what I wish my parents named me.

- The film is dedicated in memory of the original voice of Scooby-Doo, Don Messick. He died just one year earlier.

- No animals were harmed during the making of this film.

- “Coast to Coast with Daphne Blake” might be the first example of modern-day ghost hunting television.