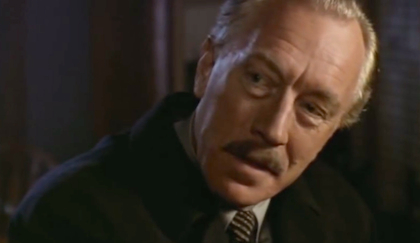 Happy October! As you are all probably aware, we are rapidly approaching that wonderful time of year known as the Halloween Season, and seeing as how it is one of yours truly’s favorite holidays, it should come as no surprise to you that this article, and many of the ones following it, will focus on the “little genre that could”, otherwise known as Horror.

In 1993, the moviegoers of the world finally had their voices heard when not one but two Stephen King novels that were based in the fictional town of Castle Rock and featuring the character of  Sheriff Alan Pangborn finally made their way to the big screen. The first of these adaptations bears the name The Dark Half and featured Timothy Hutton, Amy Madigan, Michael Rooker as Pangborn, and a whole bunch of birds for some reason. With a 67% approval rating on RottenTomatoes, it seems that the cinematic version of The Dark Half was received fairly well by the denizens of the film community. I didn’t care for it though, so let's hear no more about it. The second film in this pair of King stories is Needful Things, and with an approval rating of only 26%, it seems clear that this film failed on one level or another. Well, fie on that, I say! This is lovely little horror film that deserves not to be forgotten but to be regarded for what it truly is, and that’s a clever and solid B-movie that’s fun for the whole family. Um... in all seriousness, though, don’t let your kids watch this.

One of the things that struck me most about this movie was the dark humor that pervaded throughout. Certainly there are serious moments and great things at stake, but that underlying little thread of macabre humor keeps popping up, and for my money, it is what sets this flick apart from The Dark Half and many other horror movies of the day. Furthermore, I don’t think that it was just a cute little gimmick either. For all intents and purposes, the Devil, played here by Max von Sydow, is the main character of the film, and the devilish sense of humor contained therein comes from his delight at the awfulness and absurdity that the people of the town begin to display once they have acquired their own "needful thing". Countless movies have been made about the Devil, and he is usually presented as a fairly humorless and grim figure. This is really one of the first films that I can recall where the Devil in question is really enjoying his work. Oh sure, there have been plenty of wacky demonic figures throughout cinema, but again, this is really one of the few times where you see the monster committing his crimes just for the sake that he likes to do it. I don’t think you can get more evil than that.

So, what are some common complaints about this movie? Throughout the film Mr. Gaunt (our resident Devil) does have the habit of making some pretty terrible puns in regards to “turning up the heat” and so on and so forth. Certainly, it does seem odd that the Author of All Evil is coming off like a flim-flam man or a con artist, but I for one think it is a refreshing viewpoint and certainly not without its historical merits. I guess the fact that he is the Devil, which he is not in the book, irks some people as well. But if they did what King did with the book, then we would have an entirely different movie on our hands, and once again I applaud the choices made by the filmmakers in regards to style and tone, as they are not obvious ones when you consider the source material. Too many of the critics were complaining that it was merely a typical story in which the Devil gives people what they want in exchange for their souls. These types of gripes concern me because it shows that the critics weren’t really paying attention to the movie they were supposed to be reviewing. For starters, Mr. Gaunt never takes anybody’s soul. He offers them something they want in exchange for committing a dirty deed. The exercising of their free will in order to do that deed changes who they are, so the “taking of the soul” is more metaphorical than anything else. I personally find that far more clever than the Devil pulling a Shang Tsung here and there.

There are one or two valid complaints that I will cop to, but I don’t think they ruin the movie. Certain short cuts were taken as far as character decisions and overall scope. These defects are noticeable, and that is why, as I mentioned before, that this film is a solid B-Movie instead of a true horror classic. The wonderful tone of the movie, the excellent cast that includes Ed Harris, Bonnie Bedelia, and the late and great J.T. Walsh, and the excellent musical score by Patrick Doyle all make this movie immensely enjoyable and one that should not be forgotten. Sadly, this film is not available on Netflix, but you can rent it or purchase it from Amazon. And if you’re attempting to get hyped up in regards to the Halloween Season, then I can think of nobody way to start than with a viewing of Needful Things.