Chatting with the Marvelous Lil Mama! 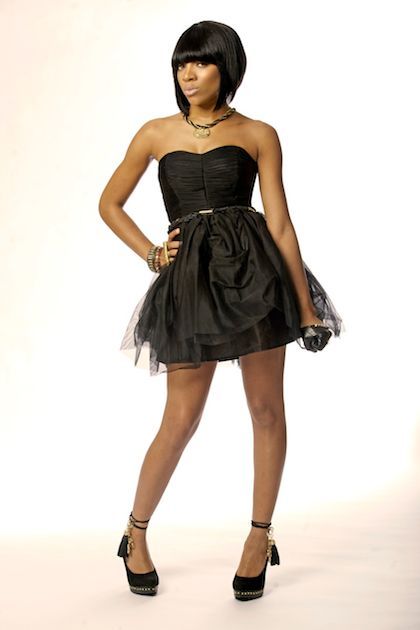 After exclaiming how her “lip gloss is poppin’” and subtly teaching a life lesson, Lil Mama released only a few more hits like “Shawty Get Loose”, featuring T-Pain and Chris Brown, before taking her rightful place as a Judge on MTV’s "America’s Best Dance Crew" in 2008. After three years and six seasons, Lil Mama (born Niatia Jessica Kirkland) is stepping out from behind the chair and back into the studio, hooking up with other musical heavy hitters and inviting us along on her journey for unforgettable experience.
I found it a little difficult to call her "Lil Mama" while speaking with her; I felt like I was speaking to a wiser and more mature peer. Our mere three year age difference felt much wider, but thanks to her cool, calm, and collected demeanor -- characteristics she emulates through her music, dance, reality show paneling, and obviously on speaker phone with a total stranger -- I thoroughly enjoyed our conversation as she spoke on being a voice, her future, her father, and her inspirations.
------------------------------------------
YH: Tell us about why you introduce yourself as “the voice of the youth.” Where did it come from, and what does it mean to you?
LM: Being the voice of the youth is just being a voice of a whole new generation. How can I explain it? Okay, for every person that roams this Universe, there is a part of your youth that still lives with you, whether that is your artist, whether it is your love, your family, whatever it might be... There are things that we carry with us from youth because that’s the essential time of knowing who you are, and knowing what you like. To know who you are is key; it is the key point. And just being a voice of the young people is basically sharing the voice of me and the voice of the youth.
YH: I love that because you are giving people at different ages a chance to embrace their youth. There is that whole idea that once you get a certain age, you’ve got to act that age, but we all embody that youthful spirit.
LM: Oh yeah, most definitely. A perfect example of the voice of the young people is the Dallas Mavericks. You have these men who were saying “oooh, he’s pushing 40, he’s in his 30s, and he won't be able to make it, he wont be able to break through Lebron.” And these guys prevailed. That’s a perfect example of the youth and someone really shinning.
YH: You’re 21... Do you feel really mature for your age?
LM: People always tell me that. [laughs] I have always been how I am, so it’s not really weird to me.
YH:  Even when we first started to get to know you, when you were about 17, you seemed really mature.
LM: Thank you, I really appreciate that. I can see why you would say that. That’s probably why my mother and my aunt named me "Mama".
YH: How old were you when you first got that nickname?
LM: I was an infant actually; that’s the funny part. And I was really chunky. I was born at 9 pounds and 13 ounces. They would say I looked like Ol’ Mama from the train -- an old lady, chunky, and the name kind of stuck with me. When I turned about two, they were like, “Well, the name fits.” [laughs]
YH: I heard in an interview once that your first love is dancing; is that true?
LM: My first love is music. Incorporated with that is definitely my voice and my body. I love to express myself through music. I love singing, I love rapping. I think rapping came along the way. Singing and dancing was always a part of me, and then the rap part just came further down the line. Not too far -- at age 13, I was writing poetry. At about 10 or 11, I transformed into a musician like going into the studio and actually practicing my art. So, I’ve always loved music, and it had its way with creeping up on my life. 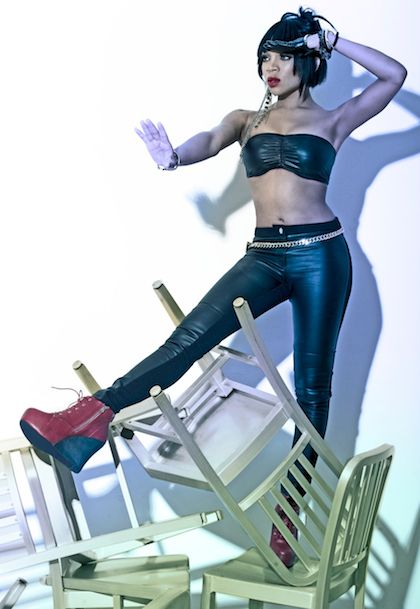 YH: How did you first get involved with getting into a studio? At what point were you invited into a studio to do your thing?
LM: My mother was always recording at the time, so I would watch her, and my dad, as a recording artist working on music, hip hop, and R&B, rap mainly. When I was about 10, I got into the studio with my dad, and I was showing him that I write lyrics and poetry and told him that I could rap. He believed in me, got me in the studio to see how many hours I could take and how much hard work I was willing to put in, and I just started to grow. "Wow, she really has something here" is what they thought, and so they just stayed behind me and I just kept going until you guys were able to experience the next chapter.
YH: What are some of your inspirations when it comes to your music -- rap, especially, as you are from New York?
LM: I was born in the birthplace of rap. I have lived in different places around the world, and the atmosphere of New York is just so epic. You see it in the movies, you see it in the throwback sounds, but to experience it is just another beast. I come from the hood, the rough areas of New York City; East New York, Brooklyn, and Harlem, New York, and it’s crazy. You are forced to grow up and be mature at an early age, and you have to choose what parts of maturity you are going to take on. I stuck to my love, which is music, my craft, and grew up that way. Others choose different ways and that’s just what New York City does to you, baby.
YH: Back to the new music that you are working on -- a project where you are putting out singles; not really an official album, right?
LM: Right.
YH: What would we call that?
LM: I guess you would call it The Experience... Because it is sort of like experiencing an artist's growth in that time. What are they bringing, what do they have, and letting it count for that much, as opposed to promises. Instead of building on promises, it is building on actions. I want my fans to get the opportunity to experience music.
YH: What is your personal view on how music has changed since you first released “Lip Gloss” [in 2007]?
LM: Music is just steadily evolving with new sounds, and I just feel like there is always room for people to grow and come with a new and fresh energy. And that’s what has been happening from everybody. T-Pain came with his sound and it worked, and it was like, wow, that’s great! Gaga came with her sound and it worked, then Young Money artists like Drake and Nicki Minaj. Then Katy Perry, and Justin Bieber doin’ his thing singing R&B, and I just think that is the most blissful part of being an artist, because you get to come with something fresh.
YH: How has your sound changed since 2008?
LM: Since 2008, my sound has changed in so many different elements and it's all in the experience itself. There are different styles that just float off of me naturally, and out of my body naturally, but in a very fun way. My tempo hasn’t really changed too much; I am just so active and ready to party.
YH: Would you say your music has matured just because you have as well?
LM: Maybe. It’s all how it is received, you know? I give it, and you receive it. Sometimes in life we receive things that we may not understand how it was given, but we find our own way to understand it.
YH: You have the new single "NYNYLALA" with Snoop; who else can we expect to hear you collaborate with?
LM: I guess you just have to stay tuned in to The Experience. It's about timing, it’s all about what the artist is giving at that time. I don’t even have an album in the works. I am just working on music and allowing you guys to be a part of it.
YH: Let me talk to you a little bit about your fashion sense. Like your music, it has changed since we were first introduced to you. What inspires you fashion-wise?
LM: Being young. Being bold. Being futuristic, you know, fearless. That’s what drives me in fashion; from when I wore a binky on the MTV red carpet to whatever. Whatever my choice was, it’s just how I am feeling. Right now, I’m feeling so young, feeling so bold, and I am feeling so futuristic that I guess my fashion is a picture. It’s proof of how I feel. I enjoy life!
YH: When you say that you are feeling futuristic, what do you mean? You’re gonna take us somewhere we have never been before?
LM: I’m feeling out of here, you know what I mean? Like, what do I do with these Earthlings? [laughs] Do you know what I mean? If you guys want to experience the solar system and understand the Universe, then you’ve gotta follow me. So, I guess I have to take you somewhere you have never been before. 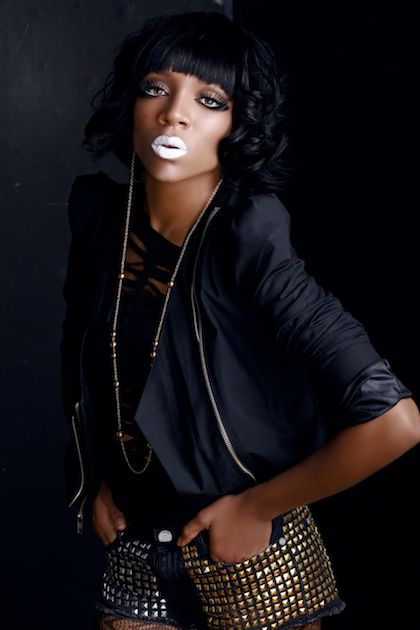 YH: So, who are you listening to right now?
LM: I am listening to a lot of my dad... My dad’s name is Tru, and he is just so amazing. He’s helped me improve so much. Not having a mom, and just having a dad now, that whole experience, listening twice as much, he’s great.
YH: What are some words you can share to aspiring artists?
LM: Well, I can start by saying that "America’s Best Dance Crew" Season 6, the Season of Superstars, which we just wrapped, was a really inspiring show for me, because we had a young group on the show called the ICONic Boyz. We also have our Season 6 champions I aM mE, along with a list of other talented groups that appeared on the show -- Street Kingdom and many more. I was inspired by ICONic Boyz, I was inspired by I aM mE being the finalists and leaving with that breath of fresh energy that "I am me and being me is great; being me is enough", because being me is more than enough, and to be iconic and just to have that energy of an icon, to have the respect of an icon, in whatever you do in life, it just feels so good. I am just inspired by life and inspired by being able to express myself and to be understood. So, whatever it is that you are doing with your life, be great, be positive, and just be the best at it, because you are you, and nobody else can play that role better.
---------------------------------------
Check out Lil Mama’s “Dough Boy” music video featuring Mishon:
...And her hot single featuring Snoop Dogg “NYNYLALA”. (THIS SONG IS AWESOME)
(Images via CASHMERE)
- Kellyé West, YH Staff