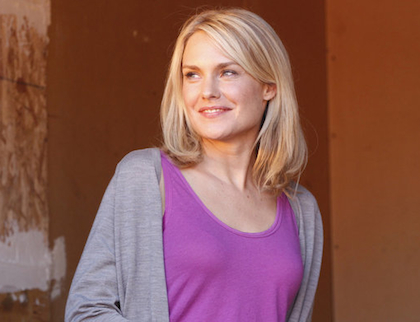 This week, I had the pleasure of chatting with the lovely Laura Allen about her new show, "Awake", which tells the story of Michael Britten (Jason Isaacs), a detective who, after he a horrific car accident with his wife and son, begins to live his life in two different realities: in one, his wife Hannah (Allen) survives the accident but his son is dead; in the other, his son Rex (Dylan Minnette) has survived but Hannah is dead. To keep the two different worlds straight, Michael wears a red rubberband on his wrist in the reality in which his wife is alive, and a green rubberband in the reality in which his son is alive. In each reality, Michael has a different therapist, different partners, and is usually working on a different case, but certain details overlap. His son and wife both handle their tragedies in different ways.
Allen stars as Hannah Britten, the wife of Michael Britten, who is handling the untimely death of her son by trying to "move on" with her life. Hannah’s attempts for a fresh start for her and Michael including re-decorating their house, and exploring the idea of moving to Oregon and enrolling in law school.
Ms. Allen chatted with me about her character, the show, and what we can look forward to for Hannah.
YH: Because there are two separate realities on “Awake,” and because you are in only one of them, does the universe in which you are not a part of feel like a different show to you? What is it like to watch the segments that are Rex's world?
LA: Rex’s world, the green world, we often do shoot on the same day, and often on the same set. As you can imagine, Michael Britten and Rex are in the same kitchen, the same house, the same hallway, wherever we are -- there is so much crossover that most often they will film the scenes back-to-back. I know that happens for the two therapists. In spite of not doing scenes together, we do see each other briefly in passing. I do read the entire script; some people have asked if I only read the red one, because often the green world informs me of where Michael is mentally and what’s affecting him as he wakes up again in the red world.
YH: I noticed that you worked as a domestic violence counselor for the NYPD. Did your work help you in preparing for this role?
LA: I have some friends who are officers, one who is a detective here in Los Angeles who has offered to give me a ride-along. When I did work with the police department in New York City, it was as a civilian. I was really a social worker with the 44th Precinct in Manahttan. The work was to bring people into the precinct who were suffering from violences at home, and police reports were made out. I would just try offer referrals, services, and try to gauge how dangerous the situation was. I don’t play a cop in this show; I’ve never had the opportunity to play a cop -- I hope one day to have the opportunity to play a cop... In this show, I get to play the person that the cop comes home to, which is also equally fascinating. Many cop shows don’t go into the home life. A cop is affected by the cases that he is working on during the day, as well as the danger that he faces every day. It doesn’t really affect Hannah’s reality much.
YH: What research did you do about parents and grief counseling to help you understand the pain that Hannah is going through?
LA: That’s a great question. I approached Hannah in an interesting way. At first, my understanding of her is that she’s an ex-tennis player, so actually all last summer I spent most days out on the tennis court, playing tennis, because I had no previous tennis skills at all [laughs]. I was reading Andre Agassi’s book, Open, and I was watching Wimbledon, just to bring myself on board with the tennis scene. I think she’s an athlete, and I’m married to an athlete -- my husband is a cyclist -- and I think that there is something very strong about the athlete’s mind. Going into the grief work, who is prepared to deal with the loss of their son? I certainly wouldn’t be. I started reading some books last summer, including Grieving Mindfully and The Other Side of Sadness. What I came away with is that there are so many aspects to grief, and not all of them are awful. There is humor, there is a richness of understanding. While doing the research, I was stunned by the growth a person can go through when handling tragedy. I started to take on an opitmistm  for Hannah and a hopefulness in trying to overcome; not necessarily forget, but move forward. It’s not denial, it’s growth. 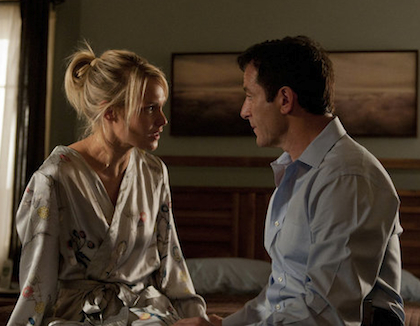 YH: What drew you to “Awake” in the beginning?
The writing was fantastic. The script came to me last March. I sat in a coffee shop in SoHo and I was stunned by the possibilites by keeping these two realities alive. I felt so sympathetic to the lead character, Michael Britten, because he so clearly loves his wife and his son that he would suffer the expense of his own sanity to keep his family alive. The therapists are written so intelligently that they help us navigate what could be a confusing premise. I was riveted as a audience member while reading this script. I originally read for Tara, the tennis instructor, and I ended up being cast as Hannah. I was so excited to carry the responsibility to tell the story of a grieving parent.

YH: How do you feel that “Awake” differs from other police shows/supernatural shows, such as “Lost?”
We keep getting compared to “Lost” and “Fringe.” “Awake” is a fascinating cop show, because it usually has two cases per episode, and clues that help solve the other, so it goes back and forth in terms of the procedural. Meanwhile, we are watching these cases and realizing that a lot of the themes in the cases are a reflection of our lead character. It’s not overdone, but he has subconscious recogniton going on in the green world, such as an image, a word, etc., and he can then take it over into the red world to use it to his benefit. I don‘t know if the audience can anticipate these things, I think a lot of cops shows audiences try to guess the outcome. And with “Awake”, I don’t know that they can stay ahead of us -- the writing is so sharp.
YH: I noticed that during the show that when we are in your (red) universe, the colors are much brighter, whereas when we are in the Rex (green) universe, the colors are softer, and have a rather sepia look to them. Has this contrast helped you keep track of the show, and what ways do you keep the stories straight as an actor?
LA: They very clearly write it out in the script so you know which scenes are red or green. But I think for the audience, it’s not just the lighting, although that is brilliantly done. My wardrobe is exclusively is reds, pinks, yellows, etc. I am not allowed to wear blue or green. For Rex, he wears muted blues or greens and isn‘t really allowed to wear reds either. We are with Michael Britton all the time, who always has the rubber band on his wrist to tell which world he is in.
YH: What can we look forward to for Hannah on the show?
LA: There’s a twist that’s coming. We saw in the last episode her moment of going to law school and her recommitment to Michael and that she’s not trying to move forward without him, that she needs a change of scenery, and perhaps it’s law school and perhaps it’s Oregon, but she knows that change is necessary for her. And that change is coming -- but not in a way that she is expecting. I think it’s a glorious change for all parties.
YH: Do you have any theories on the "conspiracy?” of the show?
LA: It came up a few episodes in that there is a potential conspiracy -- Hannah is oblivious to this. Michael is not suspicious of a conspiracy. The creators behind this show created “24” and “Homeland”, so a conspiracy theory is definitely in their wheelhouse. As the season develops, it will get very interesting in the conspiracy world.
YH: Michael tells Hannah that he dreams that their son is still alive. How do you think that his dreams impact their marriage?
LA: He tells Hannah about the dreams in the pilot, which she finds very disturbing. I think he thought that he could be a bridge, that he could somehow keep Rex and Hannah together. He shares new knowledge of Rex to Hannah, and new knowledge of Hannah to Rex. For her to hear these things is so discouraging because it implies that he’s is not moving on, so therefore she is alone in her grief. People are always on different timetables when dealing with the loss of a loved one. She feels completely isolated that he is stuck somehow, and she is trying to remember Rex and keep what she knew of him alive to some extent. But to hear that he is playing tennis, and that he has a girlfriend, it is very discouraging for her. It’s all very difficult for their marriage. She shuts down communication, she forbids him to discuss the dreams, and this is really the worst thing that she can do. We really only learn about how he is coping through his therapy.
Tonight’s all-new episode, “That’s Not My Penguin”, deals with a schizophrenic psychiatric patient, and through his schizophrenia, we see similarities between him and Michael Britten. Through the delusions, the insomnia, and the confusion between the different worlds, the patient sheds a new light on our lead character. It’s a very interesting episode. Be sure to tune in!
“Awake” airs Thursdays at 10pm on NBC.
(Image via NBC)
- Sarah Osman, YH Staff