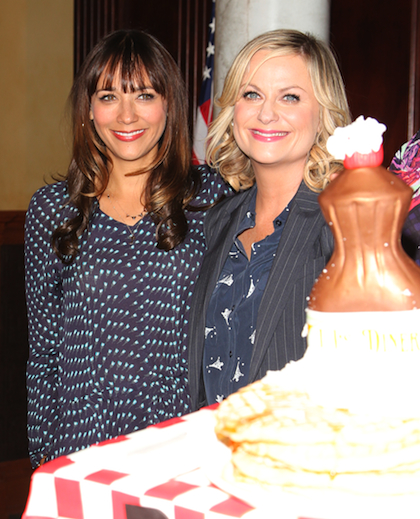 “Parks and Recreation” is a show that beat the odds in its earlier days when everybody involved in the show was excited that it got picked up for a second season, and then a third, and then, by the fourth, they all knew they could keep rolling. In honor of the “Parks and Rec” series finale tonight, and because she is as sweet as the syrup and whipped cream she douses her waffles in, let’s take a look at some of Leslie Knope’s (Amy Poehler) most memorable compliments she’s given Ann Perkins, played by the “poetic, noble land mermaid” Rashida Jones.

“Ann, you beautiful spinster. I will find you love.”

Leslie certainly does think that Ann is beautiful.

Because imitation is the sincerest form of flattery.

Leslie may love Ann, but there’s somebody on the “Parks and Rec” team that might downright hate her guts. So, on the opposite end of the spectrum, let’s take a look at some of Aubrey Plaza’s character April Ludgate’s more unsavory comments she has said to Ann...

“What, Ann? I just stole your phone and texted every guy in it that the baby was their’s. It’s not that big of a deal.”

“I wasn’t listening, but I strongly disagree with Ann.”

“I will kill you slowly with a giant syringe.”

And finally:  “Ann’s leaving town. Ann’s saying painful goodbyes to loved ones. [smiles and points to the camera] GREATEST DAY OF MY LIFE!”

Oh well. We can’t say that Ann never made an effort:

Rashida Jones is set to reprise her role of Ann Perkins in the “Parks and Rec” finale alongside her TV boyfriend… or is he her husband now? Anyway, Jones will appear again with Rob Lowe as Chris Traeger tonight. Just like “Lost”, this finale is sure to tie up all the loose ends and answer all of your burning questions about Ann Perkins, like have Ann Perkins and Chris Traeger gotten married? Will April finally bury the hatchet with Ann? Probably no for the latter, but it’s okay. Leslie will shower Ann with gifts of verbal compliments because she loves Ann, maybe even more than waffles and breakfast food.

Be sure to tune into the “Parks and Rec” finale tonight, and be sure to wash down your breakfast foods with some shots of Snake Juice!

Also, check out our interviews with some of the cast from over the years, including a visit to the "Parks & Rec" set!