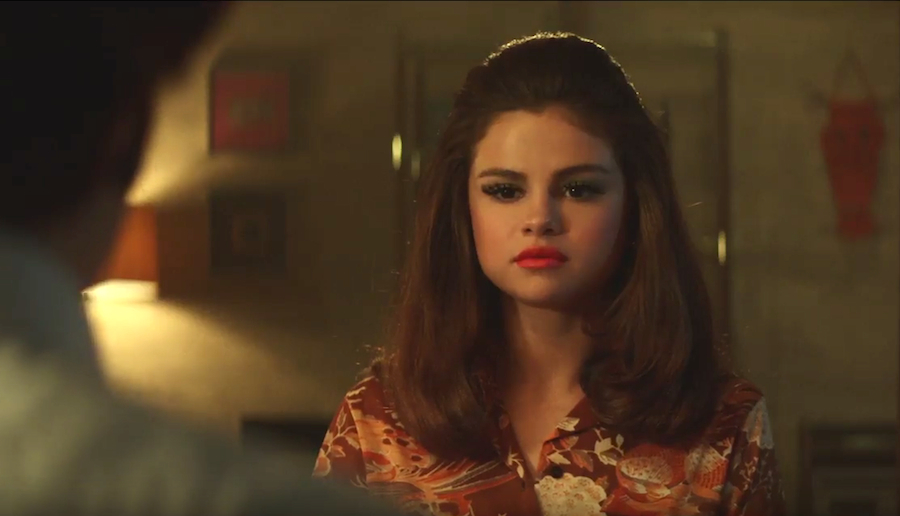 Selena Gomez is back with a brand new music video, but before you freak out, no, you don’t need to get your eyes checked -- you are seeing double, in fact, you’re seeing quadruple! The captivating stories of four different "bad liars" struggling through love and lust are all intimately connected, starting with the fact that Selena herself plays each character! Now this storyline could get a little bit confusing so let me break it down for you…

The video starts with a young, high schoo-agel Selena (cue total Alex Russo and “Wizards of Waverly Place” vibes) riding her bike to school. When a car passes, Sel looks intensely at the driver. “I was walking down the street the other day / Tryna distract myself / But then I see your face / Oh wait, that’s someone else” totally comes into play here but leaves us dying to know who was in the car!

Upon arriving to school, it’s obvious this story takes place in the 1970s, with bell-bottom jeans, round glasses, and hippies galore. It’s also important to note that high school Selena is a bit of an outcast – gossiping girls, judgmental facial expressions, and subtle shoves are prevalent.

Now we’re in the hallway. High School Selena gazes at Blonde Selena and Middle-Aged Man Selena continuing their rendez-vous on the staircase. “I see how your attention builds / It’s like looking in a mirror.” Then jump to a basketball scrimmage where High School Selena just can’t take her eyes off of her blonde twin, who appears to be the girl's basketball coach, and it seems that Male Selena is having the same problem. The web just keeps weaving...

School is out. Male Selena, who must be a coach or a teacher, walks out to meet his wife who is, as you’ve probably already guessed, a new Selena! This time, she takes the form of a stay-at-home mom, and one who appears to have had just enough of her husband. Daddy Sel mouths, “With my feelings on fire / Guess I’m a bad liar.” Momma Selena definitely knows what he’s been up to lately.

The video ends with High School Selena looking the happiest and most carefree that we’ve seen her in the entire 4 minutes. She dances around her room like a girl in love and jumps in to bed when she hears her mom coming down the hall. After pretending to be asleep, she opens her eyes and caresses a picture of her blonder, older lookalike in admiration and love.

Selena plays the roles of a high school student, the student’s mom, the student’s dad, and the woman her dad is having an affair with, whom she also happens to have a crush on. Whew, that was quite a twist!

Check out the video below!