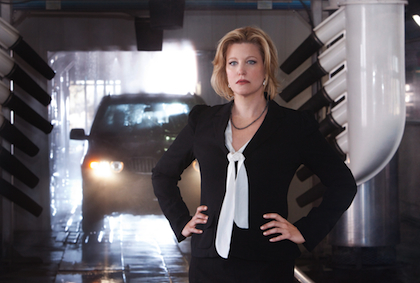 On the hit show “Breaking Bad”, Walter White has run an illegal meth lab, allowed his partner’s girlfriend to die thus inadvertently causing a plane crash, lied to his family, and has killed multiple people. Yet it’s his wife, Skyler White (played by the fantastic Anna Gunn), that viewers seem to have a problem with. Anna Gunn decided to speak out by writing an op-ed for The New York Times on what it’s like to essentially have people hate your character (and, by extention, you yourself). Gunn noted that “Skyler has become a flash point for many people’s feelings about strong nonsubmissive, ill-treated women.”

Of course, Skyler isn’t the only wife of a an anti-hero to be blasted on the internet. Over the years, characters like Carmela Soprano (Edie Falco), Betty Draper (January Jones), and even Don’s new wife, Megan (Jessica Paré), have taken in a lot of heat for being seen as giant buzzkills keeping their husbands away from badass proclivities. Gunn did realize from the beginning that her character wouldn’t be the most popular, as she is “the one character who consistently opposes Walter and calls him on his lies.” Even on the show, Skyler is called out as being a villain -- her own son calls her a “bitch” and her sister recently smacked her across the face.

However, there was no way Gunn could be prepared for the sheer amount of hate she would receive from viewers, who seem to have trouble recognizing that Skyler is a fictional character that Gunn merely portrays and have directed a lot of negativity towards Gunn personally. Gunn decided to try to address why viewers hate Skyler so much, and concluded that it's because she has a “backbone of steel, who would stand up to whatever came her way, who couldn’t just collapse in the corner or wringing her hands in despair.” Apparently viewers didn’t like this, and wanted Skyler to sit quietly in the corner and do whatever her husband asked of her.

I personally applaud Gunn for writing this essay. Like her character, Gunn showed some true bravery by standing up to her critics. I’m personally quite stunned that people would be this appalled by a fictional character, and a strong female one at that. And it’s never okay to threaten others -- especially because you don’t like the character that they play. Gunn isn’t the only one of late either -- there is currently a petition going around to have Ben Affleck removed from his role as Batman in the upcoming Superman film. I personally find this to be ridiculous, for the following reasons: (1) It is called "acting" for a reason; (2) Batman is a fictional character; and (3) Stop the hate! So it’s a casting choice you don’t necessarily agree with. There is much more in this world to protest. It’s time to stop the hate. I encourage all of you to not bash actors, writers, musicians, etc., relentlessly online, and to instead focus your energy on praising the ones you DO admire. This sort of relentless hate online is simply another form of bullying, and it’s time for all of us to take a stand against it. Remember, no one likes to be bullied or endlessly put down, even actors and actresses on TV.