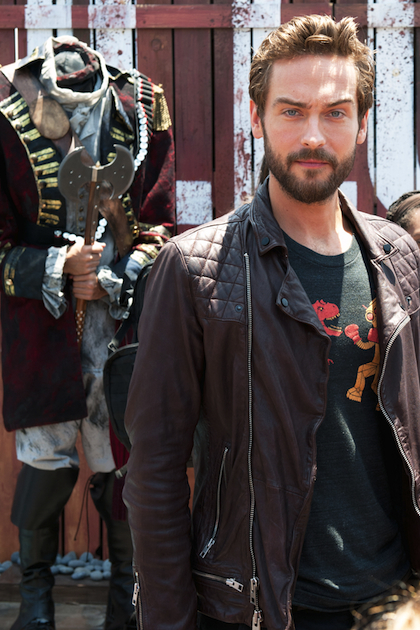 “Sleepy Hollow” is merely HOURS away from premiering its second season tonight (September 22) on Fox, but that doesn’t mean you can’t check out new material right now. A comic book companion series for the show is due out on October 15, with preluding issues already posted on the Internet.

“Sleepy Hollow” is collaborating with comic book publisher BOOM! Studios, whose other television licensed projects include “Adventure Time”, “Eureka”, “Farscape”, and a 2012 continuation of the 1960s television series “The Avengers” (no, not the Marvel version). You can check out two of the five the preluding, or “prologue”, comic issues on the “Sleepy Hollow” Facebook page or on BOOM! Studios’s Tumblr page.

The first of these two prologues focuses on one of the main characters, Ichabod Crane (played on the television series by Tom Mison). The second focuses on the other main character, Abbie Mills’s sister Jenny Mills (played on the television show by Lyndie Greenwood). Fans of “Sleepy Hollow” know that both characters are known for being in and out of mental institutions throughout the first season for different issues that are linked together.

And BOOM! Studios isn’t stopping there. For the series they’re pulling out some big guns on the creative side of the comic book community. The shorts were written by Mike Johnson and illustrated by Matías Bergara. Marguerite Bennett, who has contributed to the Batgirl series, will write the Sleepy Hollow comic book itself, and will feature art by Jorge Coelho, who has worked on Venom. Also joining the staff is Noelle Stevenson, the creator of the Nimona comics, who will also contribute a few shorts to the series.

Wow, “Sleepy Hollow” fans! You’ve got a lot to look forward to this year. Plus, this season is guaranteed to have 18 episodes! A pleasant increase from the first season’s 13 episode order. Enjoy!