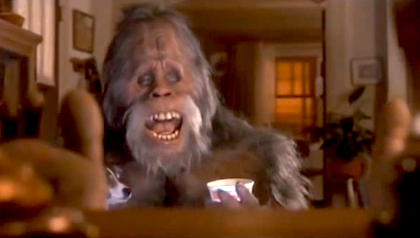 Starting late in the last decade (still sounds weird calling the 2000s "the last decade"), as a culture we have gone through a veritable buffet of supernatural obsessions with romantic inclinations. First, vampires were everywhere -- from Twilight to "True Blood" to a bit of a resurgence of "Buffy the Vampire Slayer", it was hard to not see something associated with vampires on a daily basis. There were even car commercials trying to cash in on the vampire craze by claiming the strength of their lights could kill vampires. Each franchise also contained some werewolf lore, which provided a double whammy of paranormal fixation.

A few years down the line came the popular AMC series "The Walking Dead", which, if you're not aware, is all about surviving in a post-apocalyptic zombie-filled hell on Earth. As a result, zombies were everywherein the zeitgeist! Zombies even invaded our video consoles, with games like Left 4 Dead and Dead Island made specifically to give us the experience of bashing in the heads of the undead. Even the Call of Duty franchise and South Park: The Stick of Truth gave you brief battles with Nazi zombies, because, let’s be honest, the only thing better than killing a bunch of power hungry anti-semites, is RE-killing a bunch of power hungry anti-semites.

Our zombie obsession went far enough to the point where zombie romance novels now exist. The most popular one, entitled Warm Bodies, was made into a film starring Nicholas Hoult and Teresa Palmer. Both book and film are pretty good if you never checked them out. Another romantic-comedy zombie-themed film, Life After Beth, written and directed by Jeff Baena and starring his girlfriend, "Parks and Rec" star Aubrey Plaza, was released in Sundance earlier this year. But wait a minute -- you can actually buy zombie-themed romance novels and movies? What’s sexy about zombies? They’re made up of rotting flesh and only want to eat your face. Sounds like my ex-girlfriend… (heyo!)

But zombies have been seeing a decline in popularity lately, as a new supernatural craze has been blossoming since last year. With shows like "American Horror Story: Coven", "Salem", "Witches of East End", and "Once Upon a Time", it’s no wonder that witches are now in the spotlight. But just like with zombie romance novels, we are seeing witches painted in a much more provocative light. No warts and green skin here; instead, it’s mostly revealing outfits and ideal symmetrical faces. I’m not complaining about that. I’m sorry if you don’t agree, but I’ve lived in L.A. for about two weeks now, and half the billboards here seem to be promoting something to do with witches. (The rest promote condom use.)

But with all the supernatural obsessions we’ve had for the past six or seven years, who can predict where we are going next? Let me the first to say, “I can!” If you didn’t read the title, than you don’t know where this is going, and if you are guessing it's ghosts… that ship sailed pretty quietly a long time ago. I can safely say that, without a doubt, the next supernatural pop culture obsession will be…

That’s right, everybody’s hairy, possibly blurry, and no-concrete-evidence-discovered-to-promote-his/her-existence creature will be what all the kids are lusting and raving about.

What evidence do I have to go off on this theory? A lot more than the entire series of Animal Planet’s "Finding Bigfoot" has of fulfilling their title's mission. In fact, "Finding Bigfoot" is one of the reasons why Bigfoot will be pushed into the mainstream. On the surface, the series is your run-of-the-mill reality show with a formulaic approach, but it has something a lot of reality shows don’t have: heart. Seeing the four scientists gather information on local Bigfoot sightings and go Sasquatch-watching shows the pure dedication they have to proving the existence of something that most of us don’t believe is real. When it comes to Bigfoot as an idea, it’s not exactly about proving they are real; it’s about having the belief they are. This brings a different type of interaction our past paranormal obsessions haven’t quite had.

Incidentally, "Finding Bigfoot" isn’t the only reality show about Bigfoot. In January, Spike began airing a show entitled "10 Million Dollar Bigfoot Bounty". The premise of the show is that nine teams compete against each other to find proof of Bigfoot’s existence. Whichever team succeeds gets $10,000,000. If no proof is found, then one by one, the network eliminates teams until there is only one standing, which ends with the surviving team winning only $100,000 regardless if they found anything or not. This also gives the show at least eight episodes a season. This season, Stacy Brown Jr. and David Lauer won the contest, and as most Bigfoot skeptics would guess, they won $100,000.

Need more proof? In late August of last year, the screenwriting team of Seth Rogen and Evan Goldberg got a pilot for a Bigfoot-themed cartoon show greenlit by FX. The show is said to be based on a series of Bigfoot pseudo-autobiographies by Graham Roumieu. In the books, Bigfoot combats bipolar disorder while wrestling with eating disorders, occasional cannibalism, pop culture, and philosophical quandaries. No more news is known as to when or if the show got picked up, but I hope so. It sounds insane in the best way possible, and it would definitely help Bigfoot push further into the mainstream, which helps me because I personally have an overwhelming need to be right about things.

Still not convinced about Bigfoot’s growing popularity? Bigfoot is even in video games these days. He is mentioned a lot and even makes an appearance in Grand Theft Auto V, which is not only the highest-selling video game of all time but has also broken 7 records in the Guinness Book of World Records for its popularity. When you complete the game 100%, you are given a special mission -- to track and hunt down Bigfoot! Don’t want to take my word for it? Take a look at the video below.

Okay, maybe it wasn’t exactly Bigfoot, but it basically was. For fans of the Grand Theft Auto series and Rockstar Games in general, this isn’t the first time Bigfoot has made an appearance. In Grand Theft Auto: San Andreas, Bigfoot is mentioned a lot throughout the city of San Andreas, the same city Grand Theft Auto V takes place in. As for Rockstar, its Red Dead Redemption: Undead Nightmare, which, on top of being a zombie-themed western, also has a mission to also hunt down Bigfoot. This time, Bigfoot is real and actually is the last of his kind. He also requests to be murdered… I can’t tell if Rockstar has a soft for Bigfoot at this point or if they really hate the creature.

I don’t know about the rest of you out there, but I am also hearing Bigfoot come in conversation more and more these days. It’s gotten to the point where I do an occasional Google search of Bigfoot and find there’s almost always a new reported sighting; sometimes they even have a video like the one below from Sundance, Utah. Whether these are real or not, I won’t comment, but you can probably guess my stance already.

Overall, there are only a few things percolating about Bigfoot in pop culture today, but still, things are happening. If you’re not on the Bigfoot bandwagon, that’s cool, but when Bigfoot is on the big screen in its own movie or on the small screen as a main character in television show, just remember who told you first. Until then, I’m going to get back to feeding the fire of Bigfoot’s popularity with my new book. I can’t give too many details besides the main character is a lonely National Geographic photographer named Kristen. She has a hard time fitting in with her staff and finds herself mysteriously drawn to a furry man named Burt Foote. Kristen eventually learns that Burt is a Sasquatch and they fall madly in love, but other Sasquatches and humans reject their love and drama ensues. Look for it on paperback!

Until then, we still have our well-worn VHS of Harry and the Hendersons...