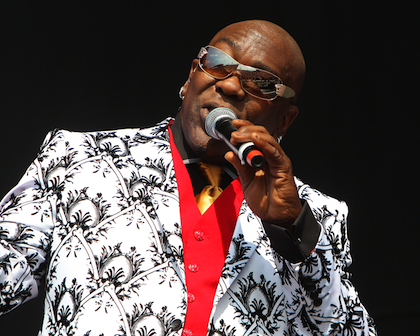 Hip hop artist Wanz, known to many as the voice behind the hook on Macklemore’s hit “Thrift Shop”, has just released a new solo single entitled “To Nate Dogg (feat. Warren G, Grynch, and Critical)”. The song is a tribute to the late, great hip-hop artist Nate Dogg who, like Wanz, is remembered for his deep vocals. Nate Dogg is best known for his work on classic hip-hop tracks with artists such as Snoop Dogg, Eminem, Dr. Dre, and one of the single’s featured artists, Warren G.

Wanz began his success a couple of years ago with what could be 2012’s most catchy song, “Thrift Shop” by Macklemore and Ryan Lewis. For the first time, Wanz was able to show off his vocals for a wide audience, and boy did everybody love it! “Thrift Shop” was nominated at the Grammys and lead to Wanz walking away with three Awards. YH caught up with Wanz getting ready for the big night in question:

Given the similarities in Wanz and Nate Dogg’s voices, it’s no surprise that Wanz would make a song celebrating Nate’s life and career. Wanz even expresses in a press release how Nate Dogg has had an effect on his life: "'To: Nate Dogg' is my way of paying respect to him for giving me a lane in Hip-Hop.” And Wanz’s way of paying respect to Nate Dogg is certainly fitting in several aspects. Wanz sings in the chorus, “Let’s smoke a little bit / And drink a little bit / Let’s party in the spirit of the dog, Nate Dogg.” Most of Nate’s songs are known for getting fans in the mood to go out and party, so it makes sense that a tribute to him would feature the very same sentiments. But don’t take my word for it -- take a listen to the song below!