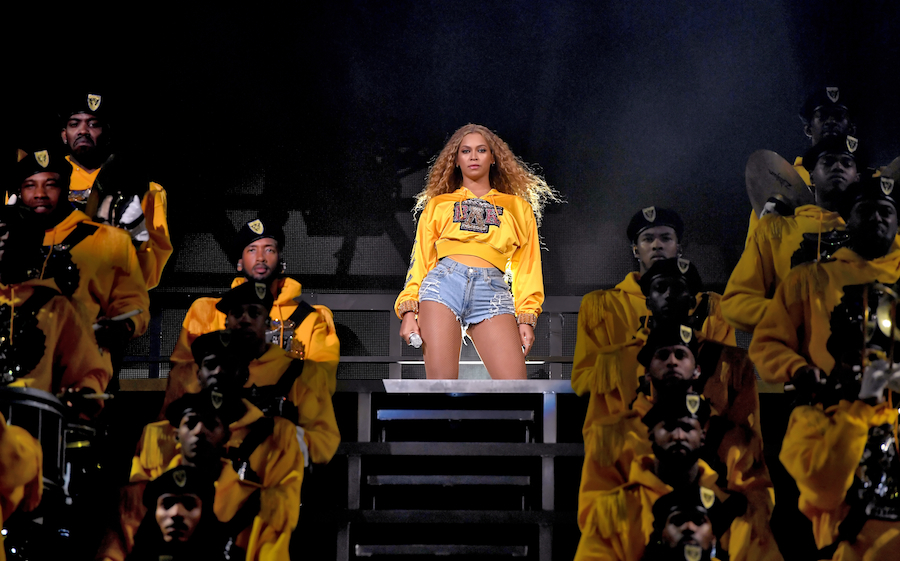 In case you missed it, the Bey Hive has been given the sweetest, most life-sustaining honey by their Queen in the form of a surprise trailer for Homecoming. Beyoncé, who for a while has been off the grid and causing fans alternating levels of separation anxiety, finally came back with a bang. The bang is to the beat of a drum line, because Beyoncé is releasing a documentary about her 2018 Coachella performance that was focused on HBCUs (Historically Black Colleges and Universities) and their music. The college band, especially the drum line, is a huge deal at HBCUs, sometimes drawing more fans than the football teams. Beyoncé paid homage to this tradition on her tour by including a drum line and majorette dancers, another pillar of HBCUs. We’ll never forget the Greek letters for Beta Delta Kappa on that iconic yellow sweatshirt, a tribute to the fraternities and sororities that are part of these HBCU communities. Not one to keep it simple, the performance also included a step show (another important part of black sororities and frats) and African-inspired costumes, including a very Wakandan headpiece. Her performance pretty much became an immediate piece of American history.

The footage from her Coachella set has always been hard to find, and now it’s clear why: Bey was saving it all for this doc. The trailer features lots and lots of moments from her concerts. It’s also narrated by one of the greatest poets and activists (and Beyoncé’s inspiration), Maya Angelou. Glorious soundbites from one of Angelou’s last interviews set the tone for this monumental movie: "What I really want to do is be a representative of my race, of the human race. I have a chance to show how kind we can be, how intelligent and generous we can be. I have a chance to teach and to love and to laugh.”

This doc will dive deep into the planning of this performance, which had to have taken a long time, since it was 26 songs long and featured guest performances with her sister Solange, Destiny’s Child, hubby Jay-Z, and J. Balvin. It also included more than 100 dancers. As the first black woman to headline Coachella, Beyoncé saw her chance to lift up black voices and she ran with it. Now we’ll get to see that running in all its glory. We’ll also get our first look at her adorable twins, Rumi and Sir, who have kept a very low profile until now. Blue Ivy, who we know and love, will also be making an appearance, and from the looks of it, she’s already keeping up with her mom’s backup dancers. A legend in the making. Just like this performance became instantly iconic, this documentary is set to cement itself in musical documentary history. Mark your calendar now, because you don’t want to miss this epic documentary when it hits Netflix at 12:00am Pacific Standard Time on Wednesday, April 17.