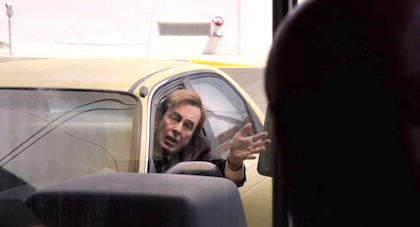 It’s been over a year since the masterpiece that is "Breaking Bad" completed it's 5-season run, and the hype for its new spin-off series, "Better Call Saul", has been looming in its wake.

AMC has been giving us little bits of what they call "trailers" since the beginning of November, but none of them have really given us much to go as to what we can expect from the actual show.

Or this possible country version of the theme song?

But finally -- Finally! -- they have released something that we can really wrap our teeth around! It really needs to introduction, just watch:

MIKE! So, I might be a little bias because, Mike Ehrmantraut (played by Jonathan Banks) was one of my favorite characters from "Breaking Bad". The clip doesn’t really share much other than a possible scene we might see in the series, but it does show that a lot of Saul’s past and background will be examined. And if any other "Breaking Bad" characters show up, then fans will be even more excited than they are now.

Check out what we know about the storyline so far here.

I can’t wait to see where they take the show, and I’m hoping they include a bunch of "Breaking Bad" Easter Eggs for us.

For all things Better Call Saul, check out the AMC website.

But maybe you’re in trouble and you need Saul’s help. Check out this very professional website.