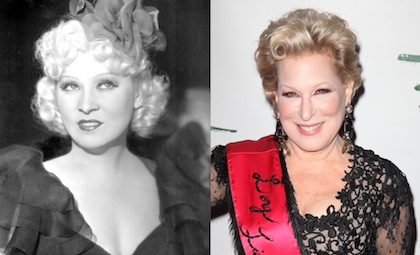 Question: What could possibly bring together the likes of Bette Midler, Harvey Fierstein, and William Friedkin?

If you said a campy Broadway revue of The Exorcist, you’re kind of on the right track!

No, the correct answer is… Mae West!

That’s right, HBO films has tapped the Divine Miss M. to star in and executive produce with Jerry Weintraub a biopic about the legendary movie star, written by Fierstein and directed by Friedkin. I kinda love everything about this.

First, it all starts with Mae West herself. For you youngsters out there, let me break it down for you this way – before Miley Cyrus dry-humped a foam finger, before Madonna writhed around on stage in a wedding dress, and even before Marilyn Monroe had her skirt blown up by a subway grate, Mae West was scandalizing the masses before movies even had dialogue. Everything about her persona just dripped with sex… I mean, she even wrote and starred in a Broadway show called Sex!! No subtlety here. She was even thrown in jail for almost 2 weeks on obscenity charges, but she gave exactly zero f***s. She continued to peddle her sexuality, taking her act to Hollywood and making a name for herself in the Pre-Code era of the 1920s and early-‘30s, when movies were allowed to be a little racy. She was 39 when she finally signed her first film contract, but age never slowed her down. She was still swaying her hips and making with the bawdy double entendres well into her ‘80s! She spent her entire life challenging the limits of censorship and shirking any attempts to tone her down. Just like Miley, she could not be tamed!

Casting Bette Midler as the saucy sex symbol is a stroke of genius. Bette has extensive theatre experience and is no stranger to going a little over-the-top and being outspoken, and at 68 years of age, she’s still a babe. It helps that, like the woman she is portraying, she is also a major gay icon.

So, it stands to reason that Harvey Fierstein would be writing the screenplay for this biopic. And Jerry Weintraub already has some pretty damn good experience with this subject matter, having been the man responsible for the critically-acclaimed campfest Behind the Candelabra.

Then you have William Friedkin, the man who directed The Exorcist, as well as The French Connection and 2011’s controversial indie flick Killer Joe. The heck?? Okay, well, he also directed 1980’s Cruising, a groundbreaking film starring Al Pacino as a detective who goes undercover into NYC’s gay underground, with rather kinky results! So, Friedkin has that going for him I guess. A biopic of Mae West is certainly not in his usual milieu, but if there’s one thing Friedkin is good for, it’s keeping things interesting!

The as-yet untitled film is currently in development, so tuned – and come sometime and see me!