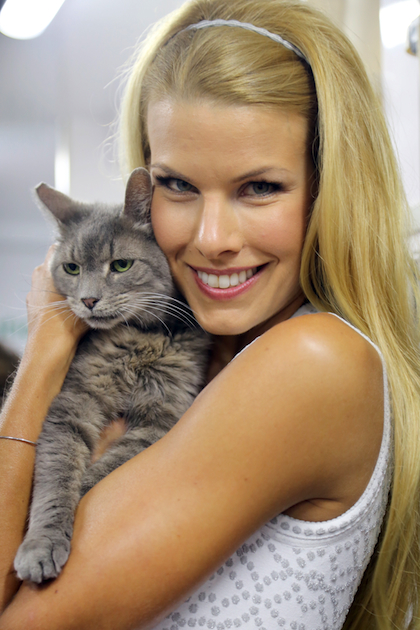 If you guys love animals, then I have an amazing story for you.

If you don’t already know who Beth Stern is, that’s okay, you’re about to find out! She’s the wife of radio/TV personality Howard Stern, but she’s made a name for herself over the past couple of years. Yes, she’s done some modeling and acting, but I’m talking about her philanthropic efforts.

I came across her Instagram a few months ago and noticed that she fostered kittens. As I scrolled through her page, I also noticed that she’s fostered A TON of them, and with the help of Howard, gave them all super cute names. She partners with New York’s North Shore Animal League, which is the largest no-kill animal rescue and adoption organization in the world!

Her story in particular stands out because of her own rescue kitty, Yoda. She’s written a children’s book (all proceeds go to the Animal League) about his story called Yoda: The Story of a Cat and His Kittens, which describes how Beth found him in the shelter, matted with a severe heart condition. She knew her time with him could end at any moment, but brought him home anyway. He continued to be depressed, until she brought home more foster kittens. Guess what happened next? HIS HEART CONDITION BEGAN TO IMPROVE! And why? He found his purpose. Yoda makes sure the orphan kittens eat, he keeps them safe, and cleans up after them. He makes sure they don’t escape the foster kitten room and acts like both a father and mother to the babies that fill his home. Beth has told this story many times and recalls the moment where she saw Yoda begin to improve. He’s a happy and super fluffy kitty, who’s made a miraculous turnaround and is healthier than doctors expected him to be. Beyond magical.

A photo posted by Beth Stern (@bethostern) on

Isn’t that the best story you’ve ever read? It still brings tears to my eyes… to come across someone as giving as Beth, let alone a kitty that can show more love than most humans can. Ugh, so beautiful.
Beth and Howard have fostered over 100 cats/kittens so far and found them all loving homes. She was the host for the Kitten Bowl, which aired during the Super Bowl this year. If you didn’t know, all kittens that appeared on the show were up for adoption!
Her social media pages are FULL of pictures and videos of her own six cats (all with special needs and all adopted from the North Shore Animal League) and the fosters. So if you ever need a little cheering up, I recommend visiting her page. She also posts updates of the past fosters so you can keep up with your favs.
If this isn’t a feel good story to you, then I don’t know what is.
Make sure to follow the journeys of Beth, Yoda and the kittens by visiting her website, Instagram, and Twitter.