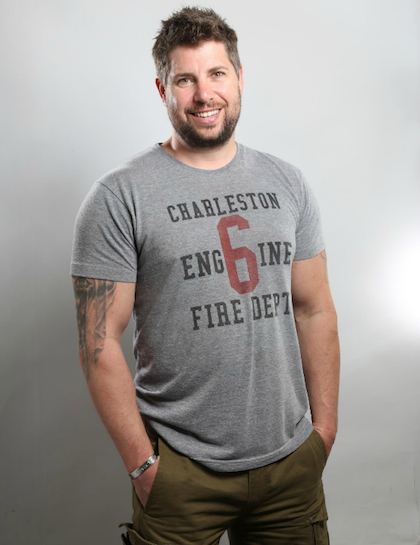 Gather round, kids, because we have a real feel-good story for you!

Travis Howze, Marine Corps Veteran, former police officer and firefighter, is an up-and-coming comedian that you should definitely keep your eyes on!

He just recently released his comedy album Reporting for Duty and get this -- a portion of the proceeds that come from album sales will be donated to organizations that help families dealing with Post-Traumatic Stress! Awww, what a big heart he has!

Speaking of heart, his story is amazing… After a tragic warehouse fire in Charleston, South Carolina, that ended up killing nine of his fellow firefighter brothers, he developed PTSD that became so severe, it cost him his nine-year career in the Fire Service.

In order to deal with the pain, Howze went back to performing stand-up comedy, which he originally did just for fun before the fire. Now, Howze tours for 25-plus weeks out of the year, performing for comedy clubs, colleges, tours overseas for the troops, and The Annual FDIC Firefighters Convention, which hosts over 50,000 firefighters across the world! Impressive!

Howze is so extremely dedicated to helping others that he participates in fundraising efforts for his local animal society and the Firefighter Cancer Network. If that wasn’t enough on Howze’s plate, he also belongs to the Rosecrance Florian Program advisory commitee, which assists firefighters and paramedics who deal with alcohol abuse and PTSD.

How amazing is this guy? If you want to support him like he supports his communities, you should look up his tour dates to see if he’ll be coming to comedy club near you! Comedy shows are always a blast, but imagine how great you’d feel showing support for a true American Hero like Travis!

If you want to find out more, follow him on Facebook and Twitter! And while you’re at it, check out this video of him performing in Alabama: