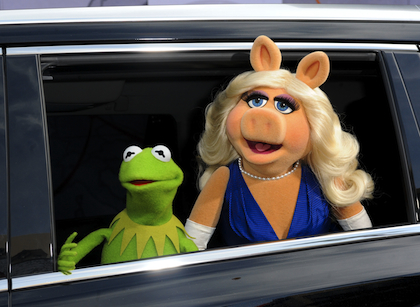 It’s time to start the music... it’s time to light the lights... because The Muppets may be returning to your TV at night!

Great news, Muppets fans -- ABC (owned by Disney, who also owns the Muppets) recently announced that they have ordered a new pilot of an updated version of “The Muppets”. In a rather unusual pairing, the project will be helmed by Bill Prady, the co-creator of “The Big Bang Theory”, and Bob Kushell of FX’s “Anger Management (so there is a high possibility that Jim Parsons and Charlie Sheen will guest star at some point; I would personally like to see Sheen face off against Animal).

The new pilot will feature The Muppets meeting with executives at ABC as they pitch a fresh, updated version of “The Muppets”. (Very meta, eh?) The show will be the classic variety hour that we all know and love (if Gonzo doesn’t shoot himself out of a cannon, then I consider the update to be blasphemy), but the gang runs into a caveat when their ever prickly starlet, Miss Piggy, refuses to be part of the project, as she is still harboring some strong resentment towards Kermit. Oh Kermit, why can’t you just treat her right for once?

Ironically, Prady actually got his start on the original “Muppets”, so this marks a bit of a homecoming for him. Kushell has had no previous experience with the these lovable puppets.

I have been hoping for a “Muppets” revival since 2011, when The Muppets, starring Jason Segel, Amy Adams, and new muppet Walter, hit theaters. I love the idea that a whole new generation will get to experience “The Muppets” just as I did. I just hope that there is plenty of Gonzo, heart, and fabulous celebrity guests.

And now, for your entertainment, here is a clip of Elton John performing with The Muppets: