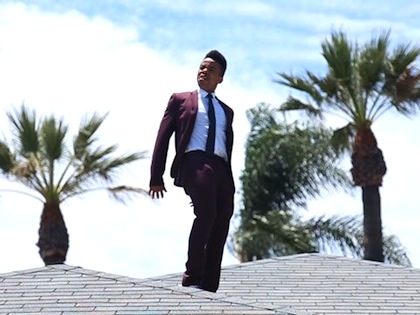 With the use of social media and music streaming websites currently on the rise right now, producer/singer/songwriter Roberto Horns is about to go from an unknown/unsigned artist to someone whose song you’ll soon be playing on repeat.

Horn just released his first-ever music video of his single, “Fake Smiles”, which you can check out below and on repeat for the entire month on our Apple TV live stream! Within three minutes, Horn proves to not only be one incredible singer/songwriter who sure knows how to create a catchy tune, but will also blow you away with his unique editing style that definitely makes him stand out from the rest!

The song came about by Horn working at a variety of different jobs while trying to figure out how to navigate into the music industry at the same time.

We had the opportunity to chat with this up-and-coming artist about all of the details behind the process of editing his first music video, who inspired him to become the artist he is today, and which well known manager he went to college with!

RH: I work in a restaurant where I met R.J. a few times. I actually went to college with Scooter Braun. I’ve known Scooter for a while, and one day, R.J. was having a meeting with Scooter in the restaurant, and I’d stopped by to say hi to Scooter because I hadn’t seen him in awhile, and I started talking to R.J. about music every time I would see him. And then, a few months back, I said "Hey R.J., I’m working on my own projects." He’s like, "Really? I thought you were just a producer and a songwriter?" And I was like, "Yeah, but I kind of want to do my own projects" and "I’ll let you know when I finish." And when I finished and I saw him, I was like, "Hey, I finished it," and he was like "Send it to me." And I sent it to him, and that was last week.

YH: Do you want to stick with producing or have you always wanted to go on a different route with singing?

RH: Not really. This is kind of brand new for me. I would like to be a professional musician. I do a bunch of different things. I play a few instruments; I play with my friends in a band if they need someone, I’ve written and produced other albums for friends, pop singers and such, and now I’m doing my own thing, and if I could just do a combination of all of that and make money, that’d be amazing. But this was kind of like a thing I wanted to do where I could get out the ideas and not have to give them away to someone else or wait for a record label to like it. This is like a quicker process for me. I like it a lot, so if this works out, I could probably do this for the rest of my life.

YH: When you go through the editing process, which type of software program do you like to use the most?

RH: I use After Effects for all of my editing. I can’t tell you how I make things float in the air, but After Effects and, honestly, YouTube, is the greatest source of information in the world. If you want to find out how to do anything, look on YouTube and you can find it. We shot things like four or five times. It took us two months to make that three-minute video because it took so long to get things right.

YH: It took two months to complete it?

RH: Yeah, a lot of the things are a lot harder than they look. It’s supposed to look flawless and effortless, but things take a long time when you don’t really know what you’re doing.

YH: When it came to learning After Effects, did you just search through YouTube, take editing classes, or did you work with a friend who knew how to edit already?

RH: No, we did it all on our own. My friend, who is a screenwriter, he owns a really nice camera and he wants to start shooting short films, and I was like, well, hey, let's shoot our music video for practice, and then we would look up cool things that other people were doing in general, like cool effects, and we were like, "Hey, we can do that, but we can make it better or make things float." So, we just kind of looked around and we had an idea of what we wanted to do to tell a story and make it look like one shot the whole time, and then we were like, man, we could make things freeze, we could make things float, it’ll look amazing; let's try to figure it out. And once we got there, we just went for it.

YH: Do you have any other songs or music videos that are going to be set for a release anytime soon?

RH: Oh yeah, definitely. So, right now, I have another song on my website called "Shitty Friend", and I’m shooting video for another song called "Working Out". I haven’t released that song yet, but we’re working on that video right now. It’s going to be pretty amazing.

YH: As of now, you are unsigned, but have you recently been working with people or have anything in the talks?

RH: I’m unsigned, I’m completely unsigned. I don’t have a publishing or anything. I’ve worked with a bunch of different people in the music industry because I’ve been around for so long.

YH: What type of music inspired you to get into this industry?

RH: Man, there are so many – too many to name – but, I mean, growing up, I was a huge Mariah Carey fan. She was like my #1 person in the world, so really funny pop music that felt really good. Kind of like [the music video for "Fake Smiles"], everything’s kind of feel-good and fun. But as I started to grow older, I listened to a lot of different stuff. It was kind of weird for me for a while, because I liked rock music a lot, but being a black kid in the south is not normal; like, I got made fun of a lot for listening to rock music. I remember when Maroon 5’s first album came out, I was like, this is incredible. And all of my rap friends were like, "This is a rock band, nobody cares about them." I was like, "No, you don’t understand, this is like the best album I have ever heard." And then three months later, it was like the biggest album in the world, and I was like, "I told you, they’re like incredible!" So, I’ve always liked a bunch of different music, but it’s all based on kind of pop music. I like all pop, feel-good, fun stuff. So, you’ll hear a lot of that in my music.

YH: Where can fans get ahold of your music immediately?

RH: It will be available on iTunes in the next couple of days. It is currently on Soundcloud and everything’s linked through my website as well. The Soundcloud link’s there, I’ll have my iTunes link there as soon as it appears, and then YouTube is where you’ll find the videos, and hopefully once I get more videos done, I can keep posting to YouTube.

YH: What is in the near future for Roberto Horns?

RH: I’m hoping the response to the video goes really well and then we’re already shooting the next video. So hopefully, when people see this one, they’ll see the next one and like it just as much. I’m just working on getting better and then I’m just going to slowly release all of the songs over the next five or six months and hopefully good things will come from it.

Make sure you keep up with Horn on Twitter and and YouTube. Who knows, you might just see him make his way up to the top of the charts! Just remember, you heard him here FIRST from YH!