What to Expect When "American Horror Story: Hotel" Checks In This Fall! 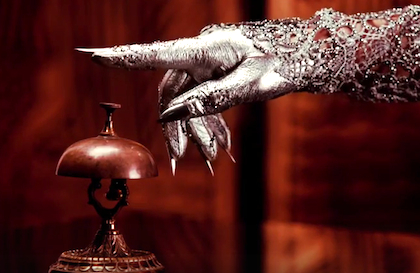 The delightfully campy “American Horror Story”, which has become known for its over-the-top characters and zany plotlines, will return October 7 on FX to bring us even more chills and thrills. The new season, entitled “American Horror Story: Hotel”, is rumored to be the sexiest one yet (oh my!) and is filled with even more fabulous guest stars than previous seasons. During the recent TCA press tour, the cast and crew filled in audiences on what horrors will await us:

“American Horror Story: Hotel” was actually inspired by a ghostly encounter that happened in an actual Los Angeles hotel. Creator Ryan Murphy got the idea for this season when he watched a surveillance video of a woman entering an elevator in the Cecil Hotel in Downtown L.A. and acting very strangely. The woman in the video was Elisa Lam, who was later found dead in a water tank atop the hotel under very mysterious circumstances. The last known whereabouts of Lam was when she entered the elevator. If that’s not the creepiest thing I have ever heard, then I’m not sure what is.

Horror #2: Lady Gaga’s character has multiple affairs throughout the season

This season welcomes the queen monster herself, Lady Gaga, who will star as Elizabeth, the wealthy, bisexual owner of the hotel who, like her real-life counterpart, is obsessed with art and fashion. Elizabeth carries on affairs with Angela Bassett, Matt Bomer, Finn Wittrock, and Cheyenne Jackson. She’s going to be quite the busy lady!

Okay, technically, the wonderfully twisted character Dandy from “American Horror Story: Freakshow” will not be returning, but the actor who played him will! Finn Wittrock will return as a sexy male model by the name of Tristan Duffy who has a hole in his heart that can only be filled by Elizabeth. Hopefully this means a lot more shirtless scenes.

Horror #4: This season features a person coming out of a mattress

Horror #5: Sarah Paulson will return, this time as a baddie!

“AHS” alum Sarah Paulson will of course return, but this time as “the baddest girl of them all.” Paulson’s character is a drug addict who has some serious beef with Iris (Kathy Bates), who runs the hotel. Hopefully this means Paulson and Bates will have an epic throwdown at some point this season!

Horror #6: Most of your “AHS” favorites are returning this season

Chloe Sevigny, Wes Bentley, Evan Peters, Emma Roberts, Angela Bassett, and Denis O’Hare will all return this season to get in on the insanity. It sounds like we’re in for a raucous good time!

What are you most looking forward to in “AHS: Hotel”?

And check out the teaser trailer for “AHS: Hotel” featuring Lady Gaga!