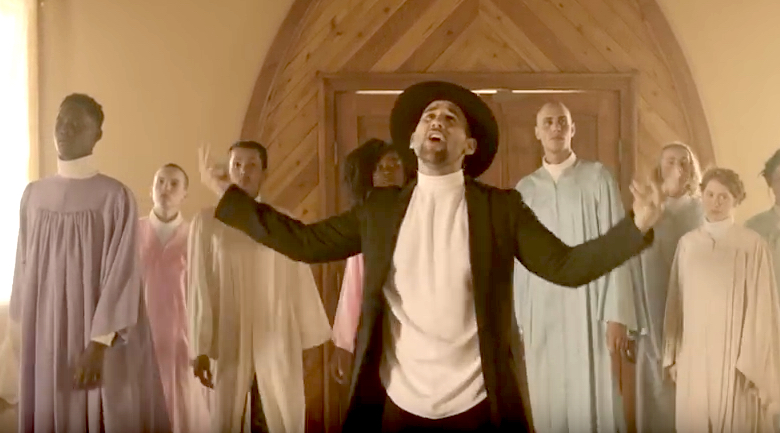 It wasn’t too long ago that Hozier was taking all of us to church with his debut single and its powerful music video. 2016 will most likely see Parson James following in Hozier’s footsteps and taking us to the temple. The pop-gospel singer is making waves in the music industry with his incredible voice and by tackling religion and LGBT issues in his lyrics and videos.

James – whose birth name is Ashton Parson – was born and raised in a small, conservative South Carolina town. Growing up, he faced racism and homophobia for being both biracial and openly gay. His maternal family even shunned him and his mother because of her interracial relationship. Despite these tensions, James found solace in the church and began expressing his feelings through songwriting.

His debut solo single, “Sinner Like You”, is autobiographical in nature, with James expressing his views on the hypocrisy found in religion. The follow-up and title track (“Temple”) of his recent EP, The Temple, follows a similar narrative, though it focuses more on acceptance and self-love.

James considers himself somewhat of a preacher. His stage name derives from his surname, Parson, which is also an independent parish priest, and for his love of iconic actor, James Dean, who is believed to have been bisexual.

The name “Parson James” perfectly symbolizes what James has set out to accomplish. His lyrics are powerful, honest, moving, and, most importantly, inspirational. It’s very rare to hear music told from a gay male perspective, particularly with gospel/religious undertones. James is taking a brave step by showing love, acceptance, and tolerance in his music.

Though a release date has not been announced, a full debut album is expected in 2016. However, James has already experienced success and popularity. His 2015 collaboration with Kygo, “Stole the Show”, was commercially successful in many countries, and his latest single, “Waiting Game”, was recently performed by "American Idol" winner Trent Harmon during the show’s final season.

Parson James is certainly an artist that needs to be on your radar. He’s extraordinarily talented and has a powerful message to share. 2016 should be a great year for this underrated artist.