ARTISTS TO WATCH: Bandits On The Run 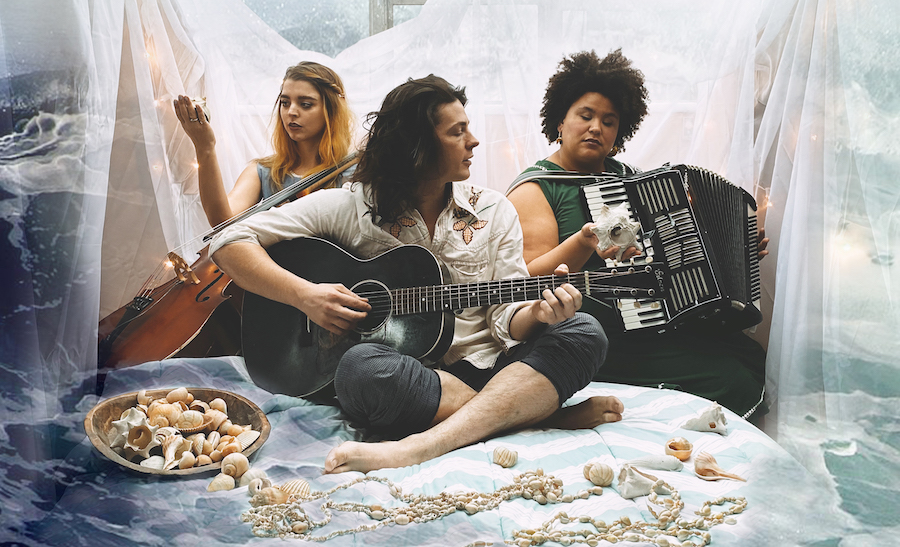 If you’re looking for the perfect escape from quarantine, Bandits On The Run have you covered with the cozy “Sing You to Sleep”, the third single from their upcoming EP, Now Is The Time. The group consists of Adrian Blake Enscoe, Regina Strayhorn, andSydney Shepherd, three friends who complement each other’s talents and alternate singing their songs.

They started off busking on New York City subway platforms, putting themselves out there and trying to connect with people passing by. Since then, they have not only pursued music but also acting, with Adrian starring as Austin on Apple TV’s "Dickinson", Regina starring in movies like Killian & The Comeback Kids, and Sydney starring on Broadway in shows like First Date. They carry this over to their music with their Bandit personas (Adrian is Roy Dodger, Regina is Clarissa, and Sydney is Bonanza Jellyfish), their recent short film "The Band at the End of the World", and their vivid lyrics that often tell stories.

Adrian is the one who leads “Sing You to Sleep”, which draws inspiration from his relationship with Sydney. He told Young Hollywood, “She can really be a very restless sleeper, sometimes getting barely any sleep because of whatever’s keeping her up that night. And it’s a very powerless feeling as a lover to be unable to calm your dearest one in the middle of the night. I wanted to capture that in a song, bottle up that feeling because it felt so purely based in love”.

This inspiration surely struck Adrian -- he wrote 10 verses before narrowing it down to the most “resonant” ones that fit the song. The lyrics take center stage with the simple instrumentation. “When we wrote it, Regina had just started to play the accordion and was playing on a much simpler model that could only play about 7 chords. So every chord we used had to be one of those or something that would blend with one of those. But I think the simplicity that came with that really echoes the endearing sentiment we were trying to evoke,” he explained.

The song is accompanied by an equally cozy music video, which takes place in a dim, cabin-like home that a friend let them film in. It begins with Adrian observing a black eye in a mirror, which wasn’t part of the original plan. “A week before we shot the video, Adrian got into a bad bike accident that scuffed up the left side of his face,” Regina shared. They thought this would symbolize “how the world is a rough place to be right now.”

In a time when pop and hip-hop are dominating the charts, it’s refreshing to hear the hum of Sydney’s cello and Regina’s accordion on songs that still feel new and fresh. “We don’t think too hard about blending influences or consciously trying to create a certain kind of sound,” Sydney explained. “We follow our impulses to what's truthful. That’s our north star. We all have such different voices and writing styles, but if we’re writing from an honest, vulnerable place, the pieces tend to fall together.”

“Sing You to Sleep” appears on their upcoming EP, Now Is The Time, which is slated for release on May 7th. The project speaks to their close bond and musical growth. Sydney shared, “We’ve lived, worked, traveled, and basically come of age together. We’ve done so many beautiful things, from scrappy DIY projects to fancy recording sessions and everything in between. Now is The Time feels like the embodiment of finding our stride as a grown-up band.”

Check out “Sing You to Sleep” on your favorite streaming service now, and keep an eye out for Now Is The Time in May!