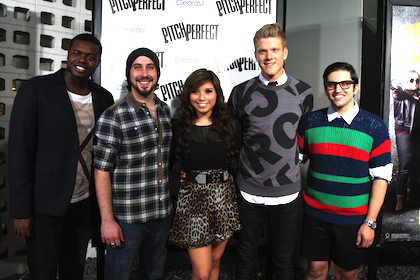 Okay, I’ll stop and spare everyone from my attempts to sing. I can’t sing, but there is a group called Pentatonix who most definitely can, and they do it A CAPPELLA.

This is Pentatonix and their Evolution of Music.

Pentatonix is an a cappella group consisting of Scott Hoying, Kirstie Maldonado, Mitch Grassi, Avi Kaplan, and Kevin Olusola. They first came to fame by winning the third season of "The Sing-Off" on NBC.

Their group skyrocketed through the competition and definitely made an impression in the a cappella community. Since the show, they have relocated to Los Angeles in hopes becoming successful recording artists. They started releasing videos early last year and later released their EP, PTX Vol. 1. They have been touring and coming up with great covers since then, such as a cover of “Thrift Shop” by Macklemore (below) and an amazing version of Imagine Dragons's hit "Radioactive".

Here is one of my most favorite Pentatonix videos. Get ready, Beyoncé fans!

They just released PTX Vol. 2 earlier this month and are currently touring around Europe, but they will be kicking off yet another tour starting in February!

Check out their website for tickets and other Pentatonix news!

Let’s end with one of their newest videos, where they went all out. Can you believe they make all of these sounds with just their mouths?