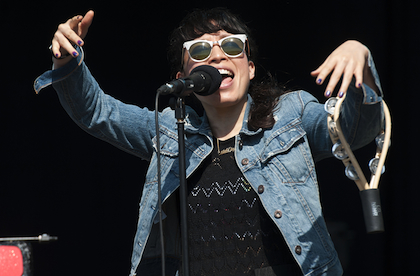 You know that moment right when you wake up from a great night's sleep? The world is hazy, you feel slightly disoriented, and you aren't sure if you're fully awake -- but at the same time, you feel calm and at ease? Listen to Little Dragon and that is exactly how you'll feel.

Haven't heard of Little Dragon? They're a Swedish electro-pop band whose music provides a form of escapism to all who listen.

Little Dragon was formed in 1996, so they know what's up in the music world. It's even been rumored that they've turned down music collaborations with both Pharrell and diplo. Whether this is true, we aren't sure. But what we do know is that the dreamy group has had their fair share of other collaborations, including Future, The Gorillaz, and this recent remix by Mikky Ekko of their song "Pretty Girls":

Little Dragon has four albums under their belt, including their most recent albumNabuma Rubberband, which came out in May of this year. Each of their tracks takes you to a state of euphoria with their blissful vocals and lyrics. And if their music itself isn't enough to captivate you, their edgy videos will. Watch their video for "Klapp Klapp" and see why:

Little Dragon recently announced their Fall 2014 tour dates and will be hitting some major cities around the globe. Check out the tour dates on their Official Website to see if they'll be playing in your favorite city!