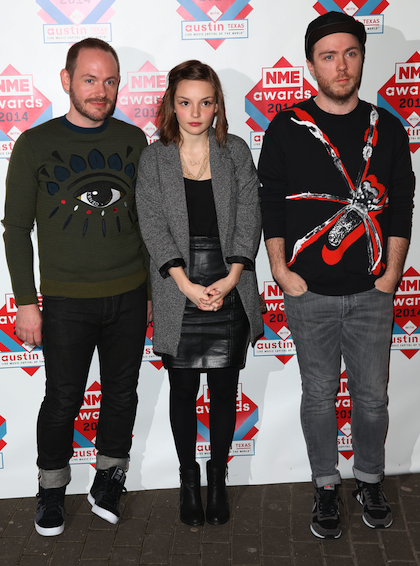 Although the spelling and the pronunciation of their name can confuse some, Chvrches is the latest indie/hipster/pop group who are out there making big waves a in an era where it is indeed very cool to be indie and hipster and pop (and finding some way to be all three all at the same time).

Formed in 2011 by a mish-mosh of Scots inluding a journalism student, a producer, and a former member of other bands, Chvrches is comprised of Lauren Mayberry, Iain Cook, and Martin Doherty. When combined, they make up a veritable Three Musketeers of synthpop goodness.

Although they are best known for the electronic and dance-y “The Mother We Share”, they also have a repertoire of move-worthy songs that include “Lies”, “Gun”, and “Recover”, all of which perfectly personify the type of sound that is increasingly starting to dominate the airwaves.

In the middle of a U.S. tour, which includes a slew of festival stops at places like Coachella, Lollapalooza, and Bonnaroo, to name a few, Chvrches are definitely going to be on the upswing of increasingly popularity. Electro-pop is the next big thing in music, so why not indulge in a band that is the epitome of that sound?