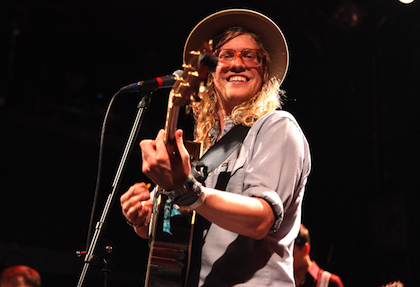 It’s always nice to see someone, especially a musician and artist, stick to their guns and stay true to who they are and what they believe in through their craft. The world could use some refreshingly sincere changes in the music scene, and such is the case with west coast native and a self-proclaimed “hippie with soul”, Allen Stone.

Upon first look, one would really think Stone’s description of himself is spot-on, what with his long blonde hair and super hipster sense of style, but what really sticks out about Stone is not his appearance but his sheer vocal ability. Who would have thought that an slightly nerdy-looking white kid from Washington State had a voice reminiscent of the good old days of soul and R&B??

Cultivating a love for singing at an early age while singing at his father’s church (that’s probably why he so damn soulful and so damn good), Stone has had a love for gospel most of his life and has even been collecting classic '60s and '70s soul albums since he was a teenager. To good avail, because all of those influences -- which include the likes of Stevie Wonder, Marvin Gaye, and Donny Hathaway, amongst others -- helped him shape his voice and music into the masterpiece it is today.

Some favorite performances of his, which are readily available on the internet, include his covers of “Is This Love” and “A Change Is Gonna Come”, and his original songs “The Bed I Made” and “Unaware”, the music video of which was recorded in his mother’s living room.

He could have recorded that music video anywhere he wanted, and people would have still flocked to it simply because he is so good.

With two self-released albums in his repertoire, 2010’s Last To Speak and 2011’s self-titled Allen Stone (which reached #2 on the Billboard R&B albums chart and feature production and help from Raphael Saadiq and Andy Grammer), Stone is definitely one of the new freshman to the music scene who will make huge waves, especially with how good he is. There is always room in the world for some good, ol'-fashioned blue-eyed soul, and Allen Stone is here to deliver just that.