Ariana Grande's Epic "thank u, next" Music Video Has Us Yelling Thank You, MORE! 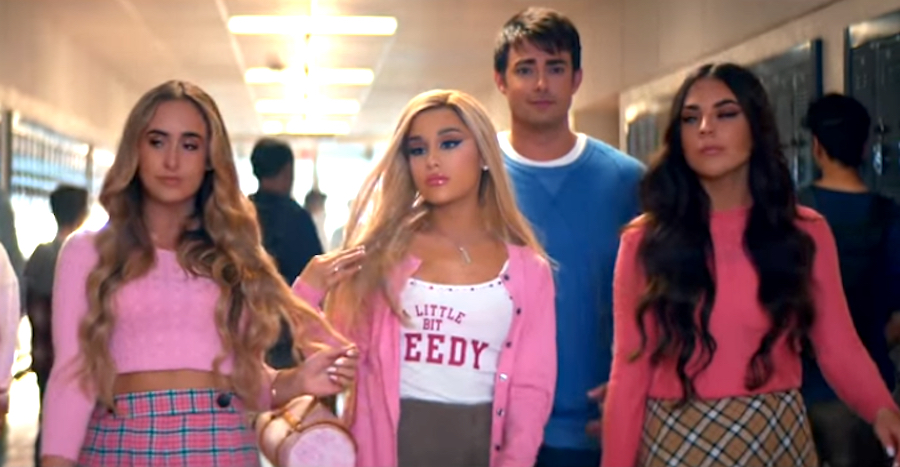 IT’S HERE. ARIANA DROPPED THE VIDEO FOR "THANK U, NEXT".

Okay, let’s calm down and discuss this for a sec before we break this down. The other day, Ariana dropped a teaser for her “thank u, next” video that showed us a sneak peak into one of the four movies she’d be paying homage to in this music video: Mean Girls.

Now that the FULL music video has been released, let’s break this thing down.

The music video starts with Ariana laying in bed à la Regina George from Mean Girls. Writing in her “Burn Book” that has “Thank u, Next” on the cover, she writes about each ex while she sings about them. First ex in the book is Big Sean, and Ari writes “So cute. So Sweet. (could still get it)”. Next up is Ricky Alvarez, and she writes “great dancer”, “good times man”, and “friends forever”. For her most recent love, ex-fiance Pete Davidson, she writes “I love u always”, “sry I dipped” and “HUUUUGE”. We’re like 10 seconds into this video and I’m laughing hysterically.

Also, for those wondering where late ex Mac Miller was in the book, Ariana addressed that on Twitter, saying his photo is by her bed. So, when she sings about him and looks out from her bed, we can assume she’s looking at a photo of him on the nightstand.

M ain’t in the book he next to my bed

We then have the iconic slo-mo hallway walk from Mean Girls (we see you creepin', Jonathan Bennett, AKA the OG Aaron Samuels). As a side note, I freaking LOVE Liz Gillies (one of Ariana’s BFFs and co-stars from “Victorious") as Cady Heron. Like… she looks SO much like Lindsay Lohan in this, it’s kinda scary. Also, Ariana shoving Troye Sivan into a locker while he looks at her in complete awe had me laughing out loud.

We then move to the iconic “Jingle Bell Rock” dance scene in Mean Girls, with momager Kris Jenner herself playing Ariana’s mother, Joan, while also acting as Amy Poehler did as Mrs. George in this scene from the film. The camera, the track suit, the dance moves... it’s perfect.

Next movie up is Bring it On. We see Ariana recreate the scene in the bathroom where Torrance and Cliff share a moment when brushing their teeth. Cliff is adorably played by Ariana’s “Victorious” co-star Matt Bennett. We also see Ari get a mixtape (from herself), signifying she’s met herself and is learning to fall in love with herself again, and she jams out to it, jumping all over her bed, pom-poms in hand, just like Torrance.

And then BOOM, a cheer scene. Honestly, my favorite part of this is Ariana’s friend Colleen Ballinger (who is 8 months pregnant) dancing around and cheering in the cute little uniform. It’s SO fun. Also, another “Victorious” co-star appears! Heeeeey Daniella Monet, you’re killing these cheers, girl! We not only get to see Ariana’s team cheer, but we ALSO have the East Compton Clovers cheerleading, and this is a perfect homage to the rivalry-turned-comraderie from the film.

When we get to the lyrics “One day I’ll walk down the aisle…”, we transition into 13 Going on 30. Ariana looks beautiful channeling Jennifer Garner. This is the scene in the movie where Jenna (Garner) has just tried to convince Matt (Mark Ruffalo) to not get married, but she gets rejected and handed back her old doll house. We see Ariana recreate this, walking away with the dollhouse as the ceremony begins, crying. When the pink wishing dust gets blown onto Ari, BOOM. Next movie.

Now, we enter Legally Blonde. As Elle Woods, Ariana drives onto campus with her Bruiser look-alike dog, dressed in all pink and confusing the heck out of everyone. We also see a glimpse of the scene where Elle (or, Ari) is studying on a lounge chair in the middle of the quad while all the boys play football around her. I swear, this girl doesn’t miss a single detail.

The song cuts off so we can watch a scene of Ariana as Elle in the salon, talking with the OG Paulette (UM, HELLO JENNIFER COOLIDGE, GOOD TO SEE YOU!!). Paulette gives her advice (well meaning, I’m sure, but definitely confusing), as Paulette does. This had me CRACKING UP. I had to pause the video. Now Ariana is studying on the same iMac Elle had while on the elliptical. AND THEN WE GET A BEND-AND-SNAP SEQUENCE. God, I love this video.

Throughout the last chorus, we get multiple shots from all 4 recreated movies; it’s fun, it’s happy, it’s dancey. You just have to see it for yourself. It has so much JOY and POWER in this. Ariana (and everyone involved in the video) did a GREAT job at recreating 4 classic and beloved films, and highlighting some really strong female characters, even adding her own twist to some of them (I especially love that Ariana’s version of the “Burn Book” is just all about gratitude towards her exes).

Alright, I’ll shut up now. But seriously, WATCH THIS VIDEO. Watch it more than once. I’ve watched it probably 5 or 6 times now in the hour since it premiered, and each time, I catch a new easter egg. All I have to say is, THANK U, ARIANA GRANDE. Now release more singles from this new album you’re working on. Thank u, next...