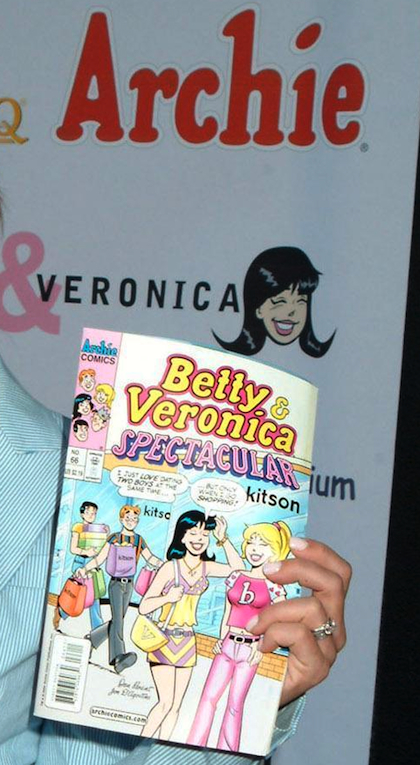 Archies Comics sure have been in the news a lot lately. And, as far as I am concerned, it couldn’t come at a worse time!

You see, from about the age of seven to about eleven, I was an Archies FANATIC. I bought every single new issue that came out, poured over it, analyzed it, recreated it on copy paper, and digested it until the next one came along. I had merchandise, records, a blonde wig to pretend to be Betty, the whole deal. I learned to draw and expand my vocabulary thanks to those comics. I took it personally when Archie would reject Betty or Veronica would do something bitchy. Yeah, I was obsessed. I have about 200 issues, still sitting in a bin in my closet to this very day. I’m actually fixing to give them away to a children’s hospital soon, so that they can bring the same joy and inspiration to another generation of kids as they brought me (minus the occasional tears and hissy-fits… that was my bad).

And, as with anything I’ve ever been obsessed about or collected over the years, my timing was tragically off. My obsession with dinosaurs came about a decade before Jurassic Park swept theatres. And had the internet actually been around when I was obsessed with Roxette in the early-‘90s, my life would have been that much fuller. So seems to be the same pattern with the Archies, as now, all of sudden, the quirky high schoolers have been thrust into the spotlight with a series of newsmaking “stunts” that have captured America’s attention.

First, it was announced that Archie would get MARRIED. Yes, the dorkalicious redhead would finally make a decision between rich snob Veronica and sweet tomboy Betty. Not surprisingly, the superficial idiot chose Veronica. Whatever, Betty was always too good for him anyway… But I digress. It was a headline event, considering Archie had been going back and forth between these gals since 1939. That’s an extremely long time to string someone along.

Then, last year, Archies Comics introduced their first openly gay character (I said “openly” – Jughead’s orientation is still debatable) named Kevin Keller. It was quite a progressive move for a series that was always considered rather old-fashioned and wholesome. Oh, but they took that shiz one HUGE step further in January of this year by going and getting Kevin hitched to his boyfriend! Yep, a gay wedding in an Archies comic! Mind=blown. Of course, if this had occurred in the harrowing days when I was tearing through Archies Comics at record speed, it probably wouldn’t have fazed me a bit. In fact, I probably would have had a mad crush on Kevin (my first kiss was with a gay boy, don’t judge).

Now, Archie and his Riverdale crew are riding that media wave all the way to McKinley High! Yes, in an unprecedented crossover, the characters from “Glee” will find themselves in a “parallel universe” that has them colliding with their Archies counterparts in a four-comic story arc! Personally, I can’t wait to see Veronica and Rachel meet face-to-face – oh the possibilities! I also envision fast friendships between Finn and Archie, Artie and Jughead, and Brittany and Betty. I also predict Kurt harboring an unspoken attraction to Reggie; he is very Blaine-like, no? Also, fingers crossed for a Sue Sylvester-Miss Grundy throwdown!!

The first issue of the crossover will hit newsstands next year. I might actually buy my first new Archies Comic in 20 years!