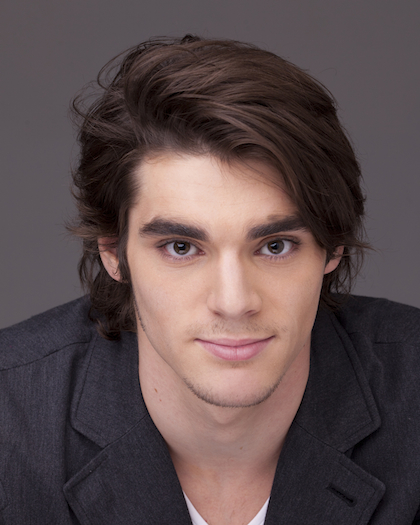 This week, we had the pleasure of chatting with RJ Mitte, who stars as Walter White, Jr. on the hit television series, “Breaking Bad”. On the show, Walt Jr. is a typical high school student who happens to have cerebral palsy. He is probably the most reasonable character on the show, and has helped his father pay for his expensive cancer treatments by creating a website, SaveWalterWhite.com, which Walter uses to launder his money. Walter Jr. has often been put in the middle of his parents' struggles, and he currently has no idea of his father’s true job.

RJ is simply wonderful to chat with -- I couldn’t help but be charmed at his goofy sense of humor and relaxed attitude. Like his character on “Breaking Bad”, RJ also has cerebral palsy, although in a milder form. In addition to working on “Breaking Bad”, RJ is currently involved with many organizations that raise awareness about equality and diversity, and he is truly passionate about the prevention of bullying. He chatted with me about his role on “Breaking Bad”, his charity work, and how ballroom dancing has helped to get the girls!

YH: It was so great to see “Breaking Bad” return! What did you think of the Season Five premiere?

RJ: I thought it was amazing. I am so excited to see the next seven that will be coming out shortly. It’s a real show. I’m truly lucky to be on it. It’s amazing to see where all the characters are going. This episode was also fun for me because I had a little bit of a monologue in it.

YH: What can we expect to see happen to Walter Jr. in Season Five?

RJ: He’s up for anything. There’s so much going on with the family right now. I feel that Walt Jr. will either be (1) sucked into this dark world further, or (2) he’s going to the light at the end of the tunnel. He really is the only pure guy in the show. He hasn’t killed anyone. Everyone else has killed people -- except for Skyler [Anna Gunn] and Marie [Betsy Brandt]. I’m excited to see what [series creator] Vince [Gilligan] has in store for me.

YH: Yourself, Anna Gunn, and Bryan Cranston, as well as Dean Norris and Betsy Brandt, have such great chemistry on screen; you really all do come across as a believable family! How have you all worked together to build such believability?

RJ: We all get along. They are like my family. We’ve been working together for the last six years, and they are really amazing. Everyone is really amazing. The whole crew, cast... everyone is very close. It’s awesome. Everyone really enjoys coming to work on the show. We go out to dinner, we hang out, we get coffee from time to time and catch up... it’s good to see them, and then it’s back to work!

YH: Are there any characters on the show that you would like to have a scene with, yet have not had the chance to?

RJ: Jonathan Banks. That would be awesome. I also really want to do a scene with Aaron Paul. Hopefully, before the show is over, Aaron and I have a meeting. It would be so cool to have a scene with him. I mean, what would happen? Aaron is Walt’s surrogate son, and I play Walt’s actual son -- it would be interesting to see how all that would come into play. I definitely think it would be an amazing, amazing wild scene when the two finally meet.

YH: Like Walt Jr., you also have cerebral palsy, although his symptoms are more pronounced that your own. Did you have to regress back to portray him? How did you get into character?

RJ: It was a challenge, but I’ve been through all this before. I know my body, how to use the crutches, the reactions to certain situations. I’ve grown up with this disability, but I have learned how to control it now. It was a bit of a challenge, yet it was very interesting and an amazing eye-opener for me to look back and see this character and everything that I have overcome in this industry.

YH: You have done a lot of work with the organization I AM PWD, as well as other organizations for actors with disabilities. How did you get involved in this cause, and what other charity work are you involved in?

RJ: Working with I AM PWD was amazing. They definitely do an amazing job with bringing awareness to those who have disabilities in the industry. I was just part of a campaign, which is done at the moment, but I am sure I will be hearing from them soon. I’ve done some anti-bullying campaigns; I feel very strongly about anti-bullying campaigns. Really, anything for the kids. I grew up with a disability, and when you grow up with a disability, you deal with a lot of bullies. Since I have been on this show, I am able to say, "Look at what I have been through, this is how I have worked through it, and you can too." I want to be able to tell people that it’s not the end of the world. You have a way out, you have goals, you can achieve anything you want. I like being involved in the community; I am a strong believer in giving back. You only get what you give... I find that when people tell their stories and talk, it really does make a big difference.

YH: You have done a bit of acting work in the meantime in addition to “Breaking Bad”, including working on the documentary Vanished: The Tara Calico Story. How did you get involved with that project, and do you have any other future projects planned?

RJ: I got involved in the project because I knew the family of Tara, who we are doing the documentary about. I went to Prom/Homecoming with her niece. I’m still good friends with her family. They wanted to do the documentary, but there wasn’t any leads on the documentary. I realized that I could help out with the documentary by bringing news to it to radio stations. That’s how I ended up helping produce it. It really was amazing to see people coming forward, wanting to help, etc., after hearing it on the radio. The documentary is almost done; we are pitching it right now. It’s a very interesting documentary. It’s interesting to see what transpired, what did happen, what didn’t happen, and what should have transpired. Apart from that, I am looking for work. I will soon be unemployed, so I am just going with the flow and seeing where it will take me. “Breaking Bad” has opened doors for all of us, it has been an amazing ride, and this is just the beginning for all of us.

YH: You now currently live in Albuquerque. What prompted you to move there, and how are you liking it?

YH:  I have heard that you like to dance. How did you get started dancing, and has it helped you to meet girls?

RJ: Yes, it has helped me to meet girls. Dancing is fun. I grew up in Louisiana, so we were always outside, hanging out, having a good time, dancing, having fun, raising hell. I definitely love to dance. While I was filming “Breaking Bad”, I took dance classes because I was home-schooled at the time, and I needed to find an extra curricular, so I felt that dance would be a good one. I took dance for a bit; ballroom mainly, it was fun. I loved it. It’s a blast. And trust me, girls like it too.

YH: Much of Walt Jr. is seen at the breakfast table. How do you strive to make your character stand out, and to make him as realistic as possible?

RJ: Everything that you see on “Breaking Bad” is in the script. And I just try to give him a little life and personality. And, yes, a lot of my scenes may be around the breakfast table, but there is so much acting that you can do when you are just sitting down and having a conversation with people. Some of the acting training I’ve done is just having a few of my acting friends over and just doing readings and monologues. Just sitting down at a table; there is so much live action that you can do in a small area. For me, a lot of it was being in a scene but not really saying anything, but still being an integral part of that scene.

Catch RJ on "Breaking Bad" every Sunday night at 10pm on AMC.