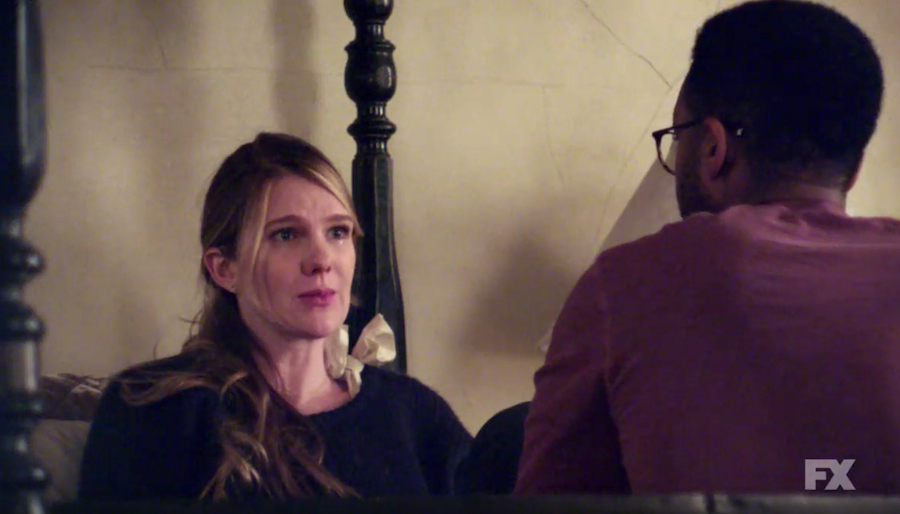 Well, Ryan Murphy did promise us plenty of surprises, and to be honest I thought we had seen the best of them already. But lo and behold, halfway through the season, Ryan & Co. have plenty more tricks up their sleeves!

I mused about the unusual new format back when the super-secret Season 6 first premiered last month, openly wondering if the True Crime Story twist was just a gimmick to make up for an otherwise lackluster season involving the same old clichéd haunted house storyline. Turns out, this season isn’t about haunted houses at all. Oh no, it’s about something far more sinister – REALITY TV!

Last week’s episode seem to close out the story of Shelby and Matt, a California couple who moved to an old farm house in Virginia only to be tormented by the homicidal souls who still lingered on the property. Having escaped with their lives, their story was retold for a TV documentary special called “My Roanoke Nightmare”, where a group of actors re-enacted their experience. When the episode ended, viewers like myself were left wondering what would happen next, since the season was only half-finished. Rumors (which I largely avoided) swirled, and this week, we finally realized what we’d been watching this whole time…

In the latest episode, documentary cameras followed the producer of “My Roanoke Nightmare” as he pitched the idea to bring together not only the folks who actually experienced the ordeal but the actors who played them and having them spend a few days back at the farm house, which, of course, would all be filmed “Big Brother”-style. At this point, we finally got to know the actors themselves (for example, the woman who played Shelby is a British actress who ended up marrying the young dude who played Edward Philippe Mott), and we also found out that Shelby and Matt split up – because Shelby slept with the guy who played Matt! DUN-DUN-DUUUNNNN! We also learned that the woman who played The Butcher was herself a total cuckoo and needed to have a restraining order placed against her.

The two camps finally agreed to come together and return to the house and were each given hand-held cameras to record their experiences firsthand. At one point, a title card pops up on the screen informing us that every single person in the house – except one – all died under “mysterious circumstances” and that what you were watching was the video they shot which was later recovered.

Yes, you all know what that means – “AHS6” just became a Found Footage story. Whoa!

So, now that they’ve totally flipped the script, what can we glean from these revelations? Well, for starters, as I said, we now know that this season is not just another haunted house story; it’s about the shameless exploitation of people who experience such events – and the temptation those people feel when the spotlight is shined on them. On the one hand, you have Shelby, Matt, and Lee, who gained all sorts of notoriety after the special aired, and the subsequent fallout, both good and bad. On the other hand, you have the actors who played them, who went through their own set of circumstances, for better or worse. At the heart of it is the puppet-master producer, determined to wring every last drop of “content” from them that he can. In the end, perhaps HE is the true “butcher”… perhaps it isn’t the house that brings these people down, but those whose morbid fascination with it keeps bringing them back…