A Lovecraft Movie Starring Nicolas Cage Is Coming & It's About Time! 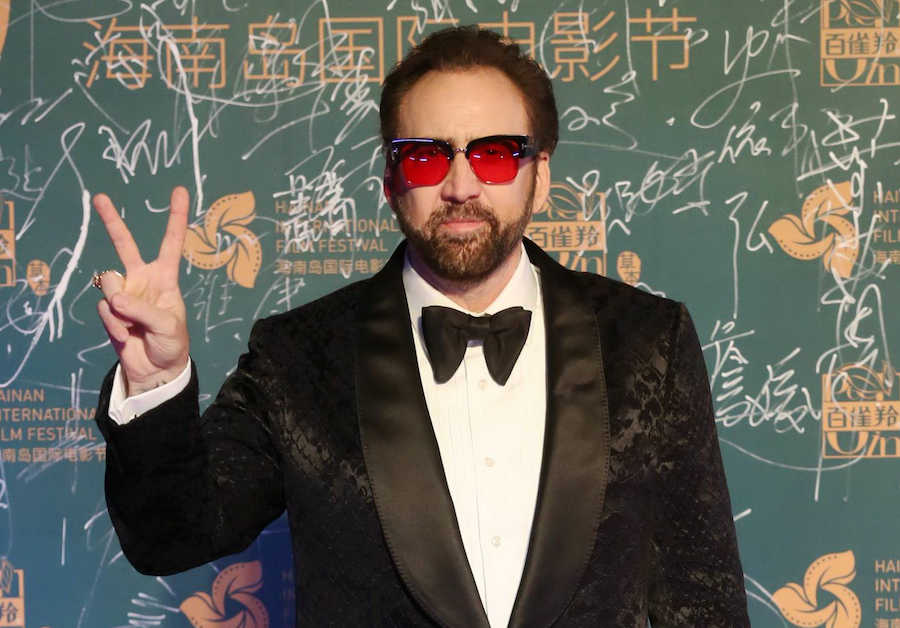 Not too long ago, I ranted at you about how bummed I am that there are no movies based on cosmic horror author with questionable views H.P. Lovecraft, despite his body of work being felt throughout much of pop culture past and present. Well, just as I get my knots tied up over this whole ordeal, somebody went ahead and greenlit a movie based on the Lovecraft story called “The Colour Out of Space” with the film being titled Color Out of Space… and then cast walking Lovecraftian nightmare of a thespian Nicolas Cage… So obviously this is the perfect start towards adapting the late author’s work to screen.

Being produced by Nic Cage fanboy Elijah Wood and his company SpectreVision, who were behind Cage’s most recent critically-acclaimed horror project Mandy, this already has all the shades of something that could be awesome for Cage. If Mandy proved anything to critics, fans, and anybody else in that spectrum, it’s that Cage can do a horror movie -- provided it’s laced with LSD to accommodate for his off-the-wall Kabuki-like acting style. (People who have seen the movie all know that even the mention of the bathroom scene is everything you need to know about Cage and his acting.) This makes Cage a great introduction for the first big feature adaptation of a Lovecraft story.

Lovecraft was ahead of his time in terms of far-out-there concepts and stories. He created an entire mythos labeled by most as the Cthulhu Mythos, revolving around inter-dimensional creatures that either directly interact with people face-to-face, influence people negatively while existing on another plain of existence (in some cases, living completely outside of time and space), or some combination of both that more often than not has a physical form that is so inconceivable to the human mind that the sight of the creature causes insanity. His stories are under an umbrella called "cosmic horror" that has gotten the big screen treatment before in films like John Carpenter’s The Thing and even last year’s Annihilation (the film ironically veered from the source material to draw on elements from “The Colour Out of Space”), but never has there been a film directly based on stories by Lovecraft or other authors who have contributed to his Cthulhu Mythos.

So, what is “The Colour Out of Space” and why is this story being adapted over other Lovecraft stories more well-known by name, like “The Call of Cthulhu” perhaps? Well, the truck doesn’t stop at “The Call of Cthulhu” for most fans. In fact, “The Colour Out of Space” is one of Lovecraft’s most beloved stories, as it follows the tale of a New England farm that has a meteorite crash onto its land. Coming from the meteorite is an incomprehensible, shapeless entity, or “thing” (this isn’t the only Lovecraft story Carpenter took from for his The Thing adaptation), that wreaks havoc as it mutates and kills all life it comes across while destroying space and time in the process. Much like Carpenter’s The Thing, or even M. Night Shyamalan’s Signs, keeping a big extraterrestrial threat to the entire world in a small confined place like a farm makes this one of the best Lovecraft stories to put on the big screen. It can give audiences who maybe don’t really know what to expect the familiarity of how claustrophobic horror movie settings can be, while also keeping the budget within reason to excel at better quality and visuals for the filmmaker and crew.

The director behind this movie is a South African horror director named Richard Stanley, whose credits include a movie called Hardware that co-starred rock legend Iggy Pop. With Iggy Pop in his movie, and with Stanley himself resembling a character that Cage might’ve played in the past or in the future, I think we have the recipe for this Cageian/Lovecraftian nightmare to be a dream come true for fans.

To finally bring this all back to Cage, it’s a wonder how something like this hasn’t happened earlier? I’ve told you enough at this point about Lovecraft’s stories for this to make sense, as Cage is already considered a legend, both beloved and infamous, and is spoken about as if he’s either dead or living on some other plain of existence. As an actor, he is completely shapeless. You tend to know what you’re going to get from Cage when he’s in a movie these days, but even that preparedness still leaves plenty of room for surprise when he goes full “Rage Cage”. You simply never see anything he’s about to do coming, and to make matters even more confusing, he is typecast-less. It’s never been clear whether he is a leading man or a character actor. You can even take away David Schwimmer’s face and replace it with Cage and Ross on “Friends” has more emotions and expressions, and that’s just in a meme… He is so simply and so complexly Nicolas Cage. Much like any of Lovecraft’s monsters, you’ll never fully understand what his agenda is or where he comes from. All you can do is look on in awe as you slip into a deep psychosis.

Color Out of Space does not currently have a release date and appears to be one of 8 films that this workhorse Cage has worked on this year alone.