A Compilation of the Best "Call Me Maybe" Viral Vids! 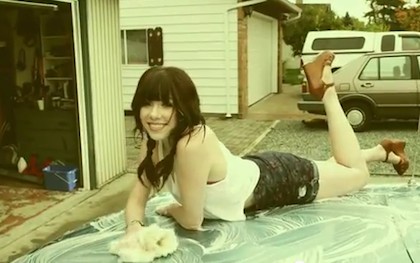 “Call Me Maybe” is going to forever be synonymous with the year 2012. Literally everyone, in some way or another, has heard this very catchy, very school-girl hit, and you’d have to be living under some really huge rock to have never ever known at least one line of the lyrics.

And the woman behind this mega-pop hit is none other than Canadian-born singer/songwriter Carly Rae Jepsen. After a brief stint on “Canadian Idol”, she released the single for “Call Me Maybe”, which in turn garnered the attention of teen dreamboat and fellow Canadian Justin Bieber. The Biebs wasted no time when he discovered Jepsen’s talent and immediately flew the now 26-year-old to Los Angeles and signed her to his record label, Schoolboy Records.

And as if being #2 on the Billboard Top 100 chart wasn’t enough, Jepsen’s immensely popular song immediately became cause for a veritable YouTube phenomenon. This song has so many covers, sing-alongs, and dance routines attached to it, we decided to compile the best of the best of the videos that made us all sing, dance, and laugh to “Call Me Maybe”!

1. YouTube channel Baracksdubs put together this hilarious Jepsen cover video of snippets compiled from none other than President Obama’s many press conferences and speeches. Without a doubt, Obama can indeed pull off one hilarious and cool performance!

2. This rendition of Jepsen’s hit features pop queen Katy Perry and her rambunctiously hyper friends dancing and singing as they make their way to the annual Coachella Music Festival. This video just makes us want to join her! Who wouldn’t want to party with Katy Perry?!

3. Of course, late night talk show host Jimmy Fallon had to his own rendition of “Call Me Maybe”, but this time he enlisted the help of The Roots and Carly Rae herself! The combination of all three acts and a camera made for one ultra-cool backstage jam session!

4. Who knew James Franco was such a big Carly Rae fan? Big enough to post his own lip-synch video to his WhoSay page! Hilarious, Mr. Franco! Hilarious!

5. The king of lip-sync videos, Keenan Cahill utilizes his many signature facial expressions and dance moves to create yet another visual to his repertoire of great YouTube hits!

6. “Call Me Maybe” is so catchy, it even has the likes of the Miss USA pageant contestants and the Miami Dolphins Cheerleading Team joining along in viral video shenanigans.

7. What else does the burly and robust Harvard Baseball Team do whilst on route to a game? Dance around the van to Carly Rae Jepsen of course!

8. What do you get when you put together the Biebs, Selena Gomez, Ashley Tisdale, Big Time Rush’s Carlos Pena, and a few of their friends on a random night at one of their houses? The video that put “Call Me Maybe” on the map as a worldwide tween anthem, that’s what.

9. Last but certainly not least, this list of great “Call Me Maybe” cover videos would not be complete without YH’s very own Carin Morris, Lian Teicher, and Kinsey Schofield. We love you girls, goofy hats, dance moves, and all!

Those were just some of our favorite “Call Me Maybe” videos. Want to share some of yours with Young Hollywood? Comment below and show us, maybe!