5 Most LOL-Worthy Moments of "Difficult People" (So Far)! 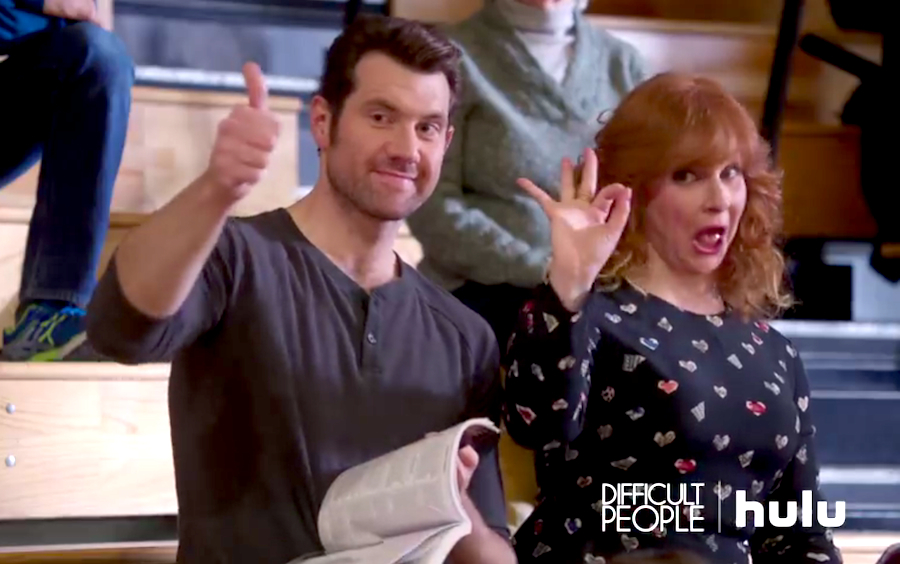 Part of the reason why Hulu's "Difficult People" is such a grippingly hilarious show to watch is because of the craziest predicaments that the two slightly unlikable protagonists (played by Billy Eichner and Julie Klausner) consistently find themselves in. The more trouble they get themselves into, the more hilarity ensues. These self-involved characters hate everyone, except each other, and that’s why their friendship is so captivating to watch. So, in celebration of the announcemnt of the show's Season 3 premiere date (Tuesday, August 8), we are reliving some of our favorite Billy and Julie moments from Seasons 1 and 2!

In the perhaps one of the cringe-worthiest moments from the show, Billy allows Julie’s mother, Marilyn, a well-meaning, narcissistic therapist, to attempt to hypnotize him to get over his ex, Josh, and his addiction to pasta. It is clear that hypnotherapy is not Marilyn’s strong point, as she gets extremely sidetracked during the hypnosis and begins to talk about herself. An uncomfortable Billy lies there awkwardly — un-hypnotized and still craving pasta.

Billy and Julie are pros at coming up with kitschy ideas that normally only sound feasible to them, but in this case their idea made a bit of sense -- the only problem was their irresponsible execution. While Billy’s boss, the owner of a small NYC café, is out of town, Billy and Julie turn the place into The Children’s Menu, a restaurant with kid’s food at adult prices. Only problem is actual children show up, ruining their idea. Well, it was a nice try.

Billy and Julie are presented with a television writing opportunity of a lifetime. All they need to do is submit a killer writing packet, and they’re in! So naturally, the two spend the whole day procrastinating instead of writing. In true Billy and Julie fashion, nothing goes right, but they have a lot of fun being wrong. Like when they decide to shop for a Ping-Pong table, convinced it will inspire them to write.

After a case of mistaken identity (Billy is mistaken for straight and Julie is mistaken for Italian), the two find themselves leading double lives in worlds where they don’t belong. The results are priceless. For Julie, this means taking on a Jersey accent and extremely big hair. For Billy, this means pretending to be the typically straight bro. As we see new sides to these characters, and as they break into new scenes and meet new people, we see that they are still, ultimately at heart, difficult.

In yet another scheme to find success, the two comedic writers decide to write a play as Taylor Swift’s cats, which honestly sounds like a hilarious play that I would be first in line to see. However, Taylor Swift was not a fan, and the two are forced to scrap the play. Instead, they decide to take a cue from the hit Broadway musical Hamilton and create their own show based on a historical figure. So, they choose former president Jimmy Carter. Their play lacks the mass appeal that Hamilton garnered, but the results are truly strange and hilarious to watch. Better luck next time, guys.

We can’t wait to see what kinds of trouble the witty twosome find themselves in this summer!