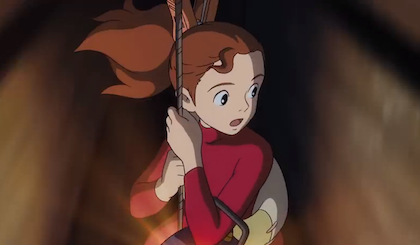 Popular Japanese anime film studio, Studio Ghibli, is rumored to be closing their doors, or at least taking a “breather”, as general manager and producer Toshio Suzuki recently said. Lead by their co-founder and director of most of their acclaimed films, Hayao Miyazaki and Studio Ghibli have produced anime films that have been nominated for many awards, including the Academy Awards, and their fandom transcends fans of anime, attracted even people who downright hate the genre but seem to dig these films. If the name is unfamiliar to you, no worries, we got you! Here are some of their more acclaimed titles, in no particular order:

This film takes place in feudal Japan, but features giant wolves, giant boars, tiny ghostly tree creatures, and a forest god who mainly walks at night… So yeah, it’s feudal Japan. The film starts off with a boar running rampant throughout a small village. Our young hero, Ashitaka, successfully defeats the beast but is infected by a demonic presence that took hold of the giant boar. Sadly, Ashitaka’s infection means he must be banned from his village to die on his own, or find a cure. Everybody feels super bad about it too, since he did save their lives after all, but they give him the proper provisions before sending him out into the world. During his journey, Ashitaka learns all about the Great Forest Spirit and eventually stumbles upon an oxen herding town called Irontown. The town is revealed to have bit of a wolf problem, as they are attacked by a pack of giant wolves and a young girl they have raised, named San (AKA Princess Mononoke). Things get kind of Dances With Wolves and Avatar-y from here as Ashitaka falls for San and sees the dark nature of Irontown’s leader, Lady Eboshi, who wants to kill the Great Forest Spirit and industrialize everything. Ashitaka joins San in her cause. All in all, it’s a great film, anime or not. A word of warning though: this is really the only Studio Ghibli film that some parents might find too graphic for their children -- there’s a whole lot of animated blood and even some cursing every now and then.

One of the few notable Studio Ghibli films released in America that wasn’t directed by Hayao Miyazaki. Director Isao Takahata gives America a rarely seen look at the effects WWII had on the Japanese citizens. This film is often cited as an anti-war film and has even gotten the attention of the late film critic Roger Ebert, who considers Grave of the Fireflies to be one of the most powerful war films, and even went as far as including it on his “Great Movies” list in 2000. The film follows two siblings, Seita (a 14-year-old boy) and Setsuko (never specified age but clearly the younger sister), who are trying to survive on their own in Kobe, Japan, after their mother is killed in a bombing made by American forces during the end of WWII. Seita and Setsuko move into an abandoned bomb shelter. Seeking light, they capture and release Fireflies into the shelter. Without spoiling anything, this movie doesn’t have the happiest of endings. The film opens with Seita dying of starvation in a train station. When he dies, a janitor searches his body for goods, but while he does this, Setsuko appears with a cloud of fireflies, but she looks different than the other people dying in the station... because she’s a ghost. Seita’s ghost rises from his body and then begins narrating the story. In the mood for a happy ending? This ain’t the movie for you. But why not give it a try?

Debatably Studio Ghibli’s most recognized film, it follows the adventures two sisters named Satsuki (the older one) and Mei (the younger one), who have just moved into a new home with their college professor father. (Fun fact: In the Disney released American version, the sisters are voiced by real life sisters, Dakota and Elle Fanning.) Seeking adventure, the sisters meet a very friendly creature name Totoro, and with him, the girls fly through the air, ride a cat-shaped bus, and get into all sorts of shenanigans. This is a great film for the kids as well as the adults.

This one really got the attention of American critics and won the Academy Award for Best Animated Feature at the 75th Academy Awards. It beat out Ice Age and Lilo & Stitch! Hayao Miyazaki even halted work on this for a while in the beginning stages, because the main character was always drawn too “cute”. He wanted a more plain-looking girl to give her a more average look. Eventually, Miyazaki was satisfied with the look of his protagonist, Sen, and took us all on an Alice in Wonderland-type trip. The film starts off with Sen bored in a car on a family trip with her parents (we’ve all been there). Her parents take a wrong turn and unknowingly enter another world (maybe we haven’t all been there…) where they find an empty restaurant and sit down to eat while Sen explores a bit. She is warned at a bathhouse by a boy named Haku to leave before sunset, or else she will be trapped in what is revealed to be the spirit world. She races to gather her parents but finds that the food they gorged on made them into pigs. With no way out, Sen is trapped in this spirit world and finds work at the bathhouse. Does she get out? You’re going to have to watch to find out!

Once again, one of the very few Studio Ghibli Films released in America not directed by Hayao Miyazaki, but he did write the screenplay. This film was directed by Hiromasa Yonebayashi and is based on The Borrowers by Mary Norton. Just like in The Borrowers, this film is about little people who go out at night to “borrow” things like sugar and toilet paper from the much bigger people who’s house they live in. Let’s be honest, though, no matter what the adaptation is, these little people are just tiny thieves and the worst neighbors of all time, but nonetheless, this film is fantastical and magical. The film follows a boy named Shawn who recounts a memory of when he stayed at his mother’s childhood home for a week with his aunt and her house maid. The house cat first brings Shawn’s attention to one of these borrower people, a girl named Arrietty. Shawn, knowing that Arrietty is stealing sugar, leaves a note near a stray sugar cube he leaves out for her. Arrietty’s father, Pod, warns her to not take it because humans must not know of their existence. Arrietty is all, “Shove it Pops! This guy is one hot tamale.” (rough translation) Tension builds as Pod is furious with Arrietty for exposing their existence to a human (eck!), and he decides the family needs to move out. Shawn doesn’t want them to leave, so he hatches some schemes of his own. Will the borrowers leave? What other things happen? Once again, folks, you just have to check it out for yourselves.

So there you have it, just five of the many great films that Studio Ghibli has produced in its 19 years of existence. Get your hands on them (LEGALLY) ASAP!