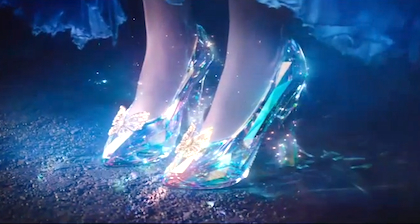 65 years after Walt Disney Pictures released it’s animated classic Cinderella, the darling fairy tale now has a live-action version, courtesy of director Sir Kenneth Branagh and Walt Disney Studios Motion Pictures. The movie will be released on March 13, 2015, and stars Lily James as Cinderella. Academy Award-winner Cate Blanchett plays her Wicked Stepmother, and Helena Bonham Carter takes on the role of her fairy godmother. After watching the trailer, I was left with an overwhelming feeling of awe. The trailer exudes magic and fantasy, and I was lost in Cinderella’s world for those two minutes. However, I noticed quite a few things that looked different than what was in the original animated version...

1. Cinderella’s mother is alive for part of the movie

In the animated version, we don’t see Cinderella’s mother at all. The narrator tells us that Cinderella’s father was a widow and longed to find her a motherly figure. In the live-action version, her mother is alive at least long enough to give her some life advice and tell her how kind she is compared to other people. Interesting...

2. Cinderella’s father leaves, rather than dies

In the animated version, the narrator tells us that Cinderella’s father suddenly dies, but doesn’t say why or how. In fact, Disney doesn’t tell us how anyone dies in the story. In the live-action version, you see Cinderella run after her father, after he tells her he knows she’ll be safe with her new family, no matter how far away he is.

Okay, I know the director wanted to do a modern version of this movie, but isn’t the whole point of the story that Cinderella can’t leave the premises? In the trailer, she’s riding on a horse, looking real emotional, when she runs into the prince. The whole magic of her meeting her One True Love was supposed to start at a the ball, not in the woods! (Unless it was a dream sequence or something...)

4. The ugly stepsisters aren’t ugly, and the fairy godmother looks like a fairy princess

Cinderella’s stepsisters, played by Holliday Grainger and Sophie McShera, are actually pretty. I mean, they’re still super evil, but they don’t look anything like the cartoon versions. Similarly, Cinderella’s fairy godmother starts out looking homey and trollish, yet turns herself into a sophisticated fairy in a beautiful white ballgown. Again, nothing like the original character.

What happened to "A Dream Is a Wish Your Heart Makes" or "Bibbidi-Bobbidi-Boo"?? Branagh has said there WILL be singing inside of the film, but no actual musical numbers. Hmmm… I wonder how audiences will react to that.

Let’s be honest, regardless of that list above, I will go see that movie. More so out of curiosity rather than obsession with the trailer...